Nissan unveiled seven Star Wars-themed concept vehicles at the 2017 Los Angeles Auto Show in celebration of the brand’s ongoing collaboration with Lucasfilm for Star Wars: The Last Jedi. The show vehicles provided a dynamic display to highlight Nissan’s dramatic designs and the famous characters and crafts from the upcoming film, debuting in theaters December 15, 2017.

Beginning with the lines of some of Nissan’s most popular models—Rogue, Rogue Sport, Altima, Maxima, and TITAN—Star Wars: The Last Jedi themes for each vehicle were developed from Lucasfilm artists, whose team penned the designs, guiding colours, textures and graphics pairing the vehicles with a craft or character from the film. 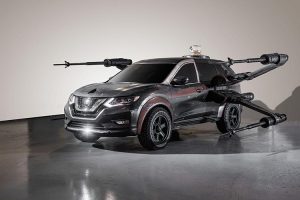 2018 Nissan Rogue: Poe Dameron’s X-wing with BB-8—With massive fixed wings spanning either side of its Nissan Rogue foundation, the T-70 X-wing starfighter features a pair of illuminating thrusters, while quad laser cannons integrated into each wingtip make the craft ready for battle. Sitting atop the crossover is a full-size BB-8 astromech droid with functioning lights, motion and sound. Photo: courtesy Nissan.

Each concept – not available for purchase – receives a unique approach, including extras such as hydro-dipped graphics, surround sound and aged exterior design to show simulated use in battle.

Once the designs were completed, the legendary Hollywood vehicle fabricators at Vehicle Effects in Burbank, California, brought the sketches to life.