By westernadmin on February 3, 2017 in Bentley, Lamborghini, Rolls Royce 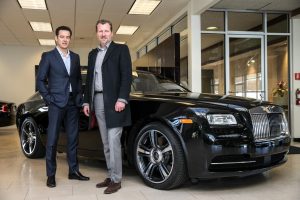 OpenRoad Auto Group, B.C.’s largest automotive dealership group, has expanded south of the border acquiring an established luxury dealership in Bellevue, Washington that represents a trio of the most iconic automotive brands in the world—Bentley, Lamborghini and Rolls-Royce Motor Cars.
The acquisition of Bentley, Lamborghini and Rolls-Royce Motor Cars Bellevue was completed on January 19, 2017, and will be OpenRoad’s first foray into the U.S. market and follows OpenRoad’s corporate strategy to expand existing relationships in key markets.

OpenRoad already owns and operates a Rolls-Royce dealership in Vancouver, while Bentley and Lamborghini are part of the VW Group of Companies along with Audi and Porsche—three brands OpenRoad represents in Burnaby and Langley, British Columbia.

As demand for luxury and ultra-luxury brands continues to grow, production of exclusive new Bentley, Lamborghini and Rolls-Royce models are planned.
In 2018, Rolls-Royce Motor Cars is slated to launch its flagship vehicle, the Phantom Sedan, and soon after an SUV code-named Cullinan.

Lamborghini, the iconic Sant’Agata-based exotic car brand known for its V12 power plants and the iconic Miura sports coupe will continue to produce some of the best super cars in the world.

Bentley Motors will mark its centennial anniversary in 2019 along with the company’s celebrated history as the ultimate British luxury automobile icon.
OpenRoad’s newest dealership is located in an urban center just 16 kilometres outside of Seattle in a region that’s home to many of the world’s leading companies, including Microsoft, Boeing, Starbucks, Nordstrom, Paccar, Costco and Amazon. Bellevue has many of the same characteristics that make the Greater Vancouver area so desirable—a prime location in the Pacific Northwest, cultural diversity, robust economy, beautiful geography and mild climate.