By westernadmin on December 29, 2016 in Motorsport, Pacific Forest Rally, Rallying 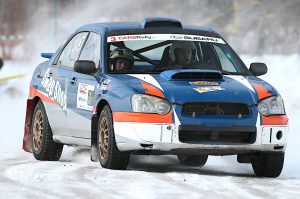 The Perce-Neige de Maniwaki rally will become international in 2017, while becoming the first round of the Canadian Rally Championship and the maiden round of the new American National Championship.

The best rally teams for all over North America will meet to compete. Based in Maniwaki since the late Seventies and held on the Upper Gatineau road network, the 52nd running of Perce-Neige will be staged on February 3rd and 4th and was chosen for the quality of its organization.

In addition to the 30-plus teams that generally enter the event, more then 20 teams will cross the border to attend.

A new rally authority has been formed and regrouped the top five major events in the United States and Rallye Perce-Neige under the same umbrella. This means that the top teams are sure to enter: returning champions Antoine L’Estage and David Higgins will be in contention for the top spot on the podium, along with motocross icon and X-Games winner Travis Pastrana.