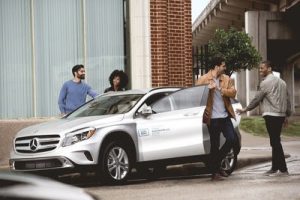 car2go members in Vancouver, B.C. and Toronto, Ontario, will get to experience the new Mercedes-Benz car2gos in early February, 2017, with car2go continuing to update its network with new Mercedes-Benz and smart vehicles across its North American locations throughout the year.

This development comes on the heels of car2go’s recent upgrades to its member experience with the rollout of thousands of new, improved, car2go smart fortwo vehicles to its Canadian and U.S. network.

car2go was initially piloted in Ulm, Germany in 2008 by Daimler AG, the parent company of Mercedes-Benz, smart and car2go. Since then, car2go has evolved from an innovative mobility experiment to become the largest one-way car sharing company, with more than 2.2-million members sharing cars on three continents. car2go’s free-floating car sharing service does not use fixed rental stations or require reservations. Instead, vehicles are spread throughout a city. Members simply use the car2go app on their smartphone to locate, unlock, drive and park their car2go in any legal parking space within a city’s Home Area.

car2go’s decision to bring large numbers of Mercedes-Benz vehicles into the company’s U.S. and Canadian network resulted from a successful pilot program in which members in Vancouver, Calgary and Toronto took trips in Mercedes-Benz B class car2go vehicles. The vehicles involved in this pilot program have been in near-constant use by members and car2go anticipates that usage of incoming Mercedes-Benz CLA and GLA vehicles will be equally high.

In 2016, car2go enjoyed approximately 43 per cent year-over-year membership growth. More than 800,000 members in the U.S. and Canada share more than 5,500 cars. Every 1.4 seconds, a car2go member takes a trip in one of nearly 14,000 cars serving car2go members in eight countries on three continents.