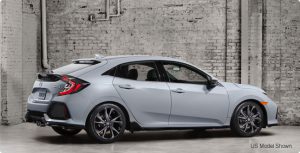 Arriving this fall in North America, the 2017 Civic Hatchback is the latest addition to the much-heralded 10th-generation Honda Civic lineup, joining the 2016 North American Car of the Year—the Civic Sedan, and the Civic Coupe that launched earlier this year.

The Civic Hatchback also will serve as the basis for the radical new Civic Type-R launching in the U.S. in 2017.

Built on the same platform as the 10th-generation Civic Sedan and Coupe, the 2017 Honda Civic Hatchback offers an appealing combination of sporty styling, efficiency, interior utility and premium features.

The Civic Hatchback will be available in LX, Sport, EX, EX-L, and Sport Touring trims, and will feature a single engine: a 1.5-litre DOHC direct-injected turbocharged in-line 4-cylinder with peak output of 174 horsepower and 162 lb.-ft. of torque in LX, EX and EX-L trims and 180 horsepower and 162 lb.-ft. of torque in the Sport and an all-new Sport Touring grade, which feature a high-flow center-mounted exhaust.

The turbocharged engine will be offered with either a sporty CVT (all trims) or a performance-inspired 6-speed manual transmission (LX, Sport, and EX trims).

The interior of the 2017 Honda Civic Hatchback carries through on the modern, sophisticated and premium quality of the 10th-generation Civic lineup, with high-grade materials and finishes applied liberally throughout.

The Civic Hatchback will target top-class safety ratings – an NCAP 5-star Overall Vehicle Score and an IIHS TOP SAFETY PICK rating with a Good rating in all crash test modes and a Superior rating in frontal crash prevention, when equipped with Honda Sensing.

The 2017 Civic Hatchback was developed jointly by Honda R&D teams in Europe and Japan and will be manufactured exclusively by Honda of the UK Manufacturing in its Swindon, UK plant.