By westernadmin on June 21, 2016 in Motorsport, Porsche, Racing 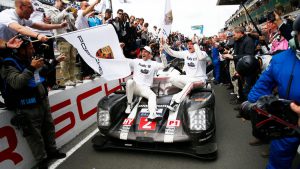 Porsche has achieved its 18th overall Le Mans victory at the 84th running of the famous 24-Hours of Le Mans.

Porsche achieved victory over a strong challenge from the #5 Toyota of Sebastien Buemi, Anthony Davidson, and Kazuki Nakajima in the final quarter of the race.

The Toyotas were able to run for 14 laps between fuel stops—one more than either the Audis or Porsches, and the #5 stretched a lead over the #2 Porsche 919 Hybrid (Neel Jani, Romain Dumas, and Marc Lieb) and its sister TS050 (Mike Conway, Stéphane Sarrazin, and Kamui Kobayashi) until it all went tragically wrong halfway around the penultimate lap.

A third of the way down the Mulsanne Straight, with Nakajima at the wheel, the #5 Toyota started losing power. In short order, its 50-second lead over the Porsche evaporated, and the car came to a halt just past the finish line—with three minutes still on the clock.

No other brand has managed to win the world’s toughest endurance race so many times and is connected that closely to the myth of Le Mans.