Aston Martin is celebrating a victory in the prestigious Car Design Award, presented at the Salone dell’ Auto Torino, Italy.

The new DB11 was named Production Car of the Year on June 15, 2016, by a jury of experts from 10 international automotive magazines.

The jury stated: “The design team has further evolved Aston Martin’s historical design cues and proportions—an elongated bonnet, aluminium roof and muscular rear fenders—a more daring interpretation. Flowing in an unbroken arc from A-pillar to C-pillar, the dramatic new roof strake adds a new flavour of modernity to the DB11. Once again Aston Martin has demonstrated of being capable to blend elegance and power.”

Heralding a new design era for Aston Martin, DB11 is the latest in a remarkable aesthetic journey for the company; one that gave the world icons such as the DB2/4, DB5 and, most recently, the DB10 developed specifically for James Bond.

“We are delighted that the new DB11 has been awarded this prestigious award so soon after its launch, this is testament to the brand values and design philosophy of Aston Martin,” said Marek Reichman, executive vice president and chief creative officer. “Every millimetre of DB11 has been re-imagined from the ground up, and every part of DB11 is designed to create the world’s most alluring DB to date.” 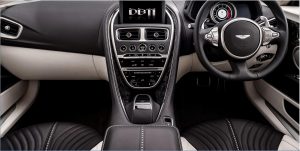 Founded in 1913, Aston Martin is a sports car marque of unrivalled heritage that has now entered its second century. With fresh investment, a new chief executive ffficer and the strongest model line-up in the company’s history, the British luxury brand is looking to an exciting future. The company boasts state-of-the-art headquarters in Gaydon, UK, combining cutting-edge technology with hand-craftsmanship and traditional techniques.

View all posts by westernadmin →
What’s it worth? Majority of Canadian drivers feel under-informed about their vehicle’s trade-in value
’80s and ’90s classics join traditional classics in Hagerty’s list of collector vehicles