The 2017 Nissan GT-R represents the most significant makeover to the iconic supercar since making its debut at the 2007 Tokyo Motor Show before its launch in the U.S. as a 2009 model.

The GT-R comes with a fresh look inside and out, as well as major driving performance enhancements and key new features. All aspects of the vehicle have been enhanced to broaden the appeal to customers seeking both GT (Grand Touring) and R (Racing) experiences.

The enhancements to the new GT-R focus on five key areas – exterior design, interior refinement, driving performance, ride comfort and advanced technology – all with the intent to create new levels of refinement and excitement.

New styling includes a new V-motion grille, one of Nissan’s latest design signatures, which has been enlarged to provide better engine cooling and now features a matte chrome finish and an updated mesh pattern. A new hood, featuring pronounced character lines flowing from the grille, has been reinforced to enhance stability during high speed driving. One new four-coat premium exterior paint colour, Blaze Metallic, has also been added to the exterior paint palette.

The interior of the Premium Edition, featuring semi-aniline leather, offers three different options: the newly added Rakuda Tan, as well as Amber Red and Ivory. The 2017 GT-R Premium also adds standard NissanConnectSM with Navigation, Mobile Apps and Services, which allows users to use a smartphone to remotely lock or unlock the car doors, activate the alarm, summon emergency services or track the car if it is stolen. 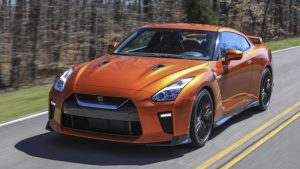 The 2017 GT-R offers 565 horsepower, which is an increase of 20-horsepower over the 2016 model, with a flatter torque curve for enhanced on-demand acceleration. Among the powertrain changes is a new Titanium exhaust system – standard on GT-R Premium models – which combines with new Active Noise Cancellation and Active Sound Enhancement technologies to filter out unwanted noise and retain excitement during spirited driving. Acoustic glass and targeted sound dampening help reduce the intrusion of wind and road noise into the GT-R cabin.

The 2017 GT-R Premium is the first of four 2017 GT-R grade levels. Prices for additional 2017 GT-R trim levels will be announced at a later date.