By westernadmin on June 2, 2016 in Volkswagen 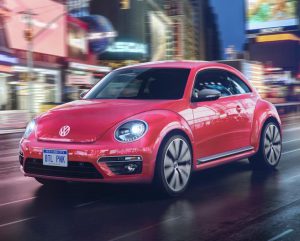 Volkswagen’s #PinkBeetle will go into production as a 2017 model, having been shown as a concept at the 2015 New York Auto Show.

The first vehicle ever to officially be named as its own hashtag, the exclusive run of #PinkBeetle models will be available in coupe and convertible configurations and will go on sale fall 2016.

Pricing of this limited-edition model will be announced closer to launch.

The 2017 #PinkBeetle will be offered in limited quantities across the United States. With a 1.8-litre turbocharged direct-injection TSI engine and a six-speed automatic transmission, #PinkBeetle produces 170 horsepower and 184 pound-feet of torque and is poised to become an immediate automotive trending topic.

Interior design features of the #PinkBeetle include a black dashpad with surrounding pink accent and a leather-wrapped multifunction steering wheel. Pink Club cloth seats are reminiscent of the signature plaid inserts of the GTI, replacing the classic design’s red striping with a perfectly matched pink hue.