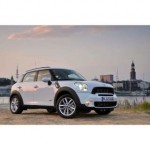 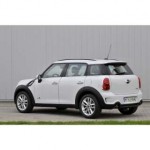 The MINI Cooper S Countryman ALL4, with an MSRP of $34,400, is the first MINI to offer a permanent all-wheel-drive system. Powered by the same engine as it’s Cooper S Countryman stablemate, the Countryman ALL4 utilizes an electro-hydraulic differential, positioned directly on the transmission’s final drive, to vary power distribution from front to rear in an infinitely-variable process. Under normal driving conditions, up to 50 percent of the engine’s power goes to the rear wheels and under extreme conditions up to 100 percent, offering a new, high-traction rendition of the agile handling so typical of MINI.

With its 181 horsepower engine mated to the standard 6-speed manual transmission, the Cooper S Countryman ALL4 delivers brisk performance, accelerating from 0 – 100 km/h in 7.3 seconds, while sipping just 6.3 litres of fuel per 100 km in highway driving.

One could not mistake the new Countryman for anything other than a MINI yet it is distinctly different to any that has gone before. It is 385mm longer than a MINI Hatch (379 mm on Cooper S models), 106 mm wider and 154mm taller.

Featuring that typical ‘wheel at each corner’ stance with short overhangs, the Countryman not only has larger dimensions than its cousins but also a higher ride height. This provides the commanding driving position preferred by many drivers with a 10mm higher ground clearance for soft off-road driving.

The MINI Countryman benefits from new chassis technology that affords it the best handling characteristics in its crossover segment and enables all models to exploit their performance with agility, comfortable ride quality and absolute safety.

The front suspension uses MacPherson struts and forged track control arms that, together with the multi-link rear suspension, provide safe and agile handling responses. The Cooper S Countryman has sports suspension that lowers the ride height by 10mm. Sports suspension can be specified as an option on all other Countryman models.

The other key elements of the Countryman chassis include powerful ventilated disc brakes (294mm front [Cooper S 307mm], 280mm rear,) precise Electric Power Steering that delivers responsive driver feedback and speed-related assistance as well as a host of electronic chassis aids that promote both safety and agility on the road.

Inside, the MINI Countryman is all about comfort, practicality and innovative style. The higher seating position offers better visibility for the driver and passengers, while the four wide-opening doors and high-opening rear hatch provide easy and comfortable accessibility. With the rear seats folded flat the interior provides no less than 1,170 litres of load space.

The interior is dominated by iconic MINI design characteristics such as comfortable yet grippy seats, the trademark central speedometer and neat, funky switch packs.  New elements of MINI design language are introduced with the elliptical interior door trims that continue from the front to the rear door and back. All MINI Countryman models feature the innovative MINI Centre Rail system. In place of the conventional centre console the U-shaped Centre Rail runs from front to rear down the centreline of the Countryman, offering a range of optional fixtures including storage boxes, cup holders and a document holder.

A MINI is not a MINI without the ability to customize- and the MINI Countryman is no different. With up to 11 distinct exterior colors (6 metallic and 5 non-metallic), not to mention alternate choices of roof color, 7 unique upholstery variations in 6 different colors, 10 option packages, 9 stand-alone options and 3 distinct wheels, the customization potential of the MIN Countryman, in true MINI fashion, is virtually endless.

Among the equipment protecting the passengers inside the MINI Countryman are front and side airbags, curtain head airbags covering both rows of seats, three-point inertia-reel seatbelts for all seats and ISOFIX child seat attachments in the rear. The front seats have belt tensioners and belt force limiters, while the safety steering column of the MINI Countryman also comes with a deformation element. The body structure, restraint systems and safety electronics are perfectly coordinated to minimise the consequences of any type of collision.

The MINI Countryman also has a runflat indicator as a standard feature. This system monitors the tyres and uses a visual signal in the on-board computer display to alert the driver to any tire damage.

The 2011 MINI Countryman also comes with no-charge scheduled maintenance for three-years or 50,000 km (whichever comes first), as do all 2011 MINI models.

Following a break of over 40 years MINI will return to the World Rally Championship as a “works” team with a specially developed version of the new MINI Countryman—the MINI Countryman WRC.

The MINI Countryman WRC has been developed in accordance with the new Super 2000 regulations to be introduced in 2011 which stipulate that cars will be powered by 1.6 litre turbocharged engines and four-wheel drive. The first practical test for the MINI Countryman WRC took place in autumn 2010 in preparation for competition in selected events of the 2011 WRC, before competing in the full series in 2012.

The 2011 MINI Countryman lineup arrives in MINI dealerships in January of 2011.