By westernadmin on November 30, 2010 in Ferrari 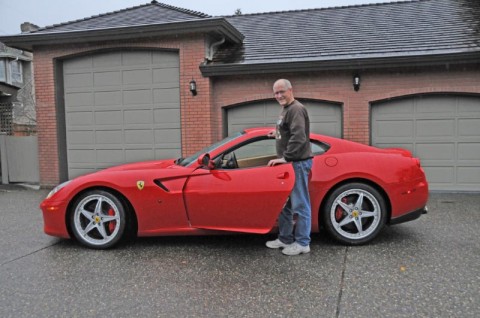 Half of November’s rainfall was due to fall the day I got to test the new Ferrari 599 HGTE. As I stood in Ferrari of Vancouver’s showroom looking outside at the bright red car waiting for me, the rain came down in buckets. High-speed testing was going to be a challenge, but opportunities still existed for lower speed cornering and handling trials. The old racer’s creed “keep the shiny side up” never held truer than on a day like today.

Ferrari introduced the 599 Fiorano in 2006 at the Geneva Auto Show. It has the Fiorano moniker to commemorate Ferrari’s Formula 1 test track in Maranello. The Ferrari 599 is a grand touring car with a V-12 engine, derived from the Enzo, pumping out 620 horsepower. This special edition HGTE model (Handling Gran Turisimo Evoluzione) is an answer to some owners who wished to have handling characteristics more in line with a Ferrari 430.

The HGTE package is a $37,600 option in Canada and includes several upgrades to stiffen the suspension, lighten the weight of the car, tighten the steering, and give it a throatier sound. Newly formulated Pirelli P Zero tires are mounted on 20 inch split rim wheels. Front tires are 8.5 inch 245/40 tires up from the 8 inch ones found on the standard 599. The rear tires are the same 11 inch 305/35’s as standard. Imagine calling a $450,000 plus car standard!

The suspension is tighter with a 10 mm reduction in height and firmer springs. The front springs are 17 percent stiffer and the rear ones are 15 percent stiffer. A thicker anti-roll bar was added to help improve body lean. The steering was tightened by engineering a 20 percent decrease in lock needed to corner at lateral accelerations of 0.8g and greater. This combination of engineering improvements has shaved 19 percent off the body lean in a corner and 36 percent off body movement through a succession of curves taken at speed.

Outward appearance includes a different design to the grill, matt black diffuser, and chromed exhaust tips. Inside the car there is a more liberal use of carbon fibre and other lightweight materials to trim overall weight. A mix of Alcantara and leather is used for the HGTE, however on this show car, it is outfitted with full leather upholstery. Handling GTE is embroidered on the seatbacks. Subtle differences, but the exhaust note is hardly subtle. It brings an ear-to-ear grin when you fire up the engine. Which brings me to my drive!

The car was moved inside for me so I could walk around and get checked out on controls out of the rain. The car was immediately comfortable and anyone familiar with Ferrari’s recent products would be quite at ease in the cockpit. The car was equipped with paddle-shifters and a manettino to select road-handling preferences. On this rainy day, I chose the slippery mode to start to give the car’s computers the full control on traction and stability. As I started the engine, I was a little overzealous on stabbing the gas pedal and a chorus of lions roared letting most people in East Vancouver know I was ready.

My drive took me through downtown Vancouver to Stanley Park. The drive around the park is approximately 10 kilometres and full of nice twisty bits. On a rainy day, the park was nearly empty and it gave a chance to test the handling package. The 599 HGTE performed exceptionally well. I pushed the car into the corners as much as I dared and was never let down. It cornered flat and body roll was not a concern.  While speed was limited through the park, there were enough twisty bits to feel the attitude of the car. On a dry day one could have tested at over 160 km an hour but most 599 drivers will seldom get that opportunity legally except for on a track day.

I continued to UBC and had the chance to drive some rougher patches of road combined with curves. The 599 HGTE took the rough pavement better than my own Ferrari 360 but you still know you are in a high performance sports car. Potholes will still jar your teeth but your spine is left intact!  Around UBC there are two sets of S-curves that can be taken at a reasonable speed and the 599 HGTE performed up to expectations. From my limited condition drive, I enjoyed the improvements in handling and buyers looking for a sportier version of the 599 should be quite satisfied with the HGTE package.

Out of the curves and into the straight, I put my foot down to pass a slower car. The 620 horsepower engine rockets you forward. You feel yourself pushed deep into your seat and you hold on. The acceleration is immediate and rampant! This car would definitely be my choice for driving across the country. In the 599 HGTE you have the best of both worlds, a comfortable grand touring car that is set up to play if you get off the highways and decide to drive some of the windy mountain or country roads.