By westernadmin on February 6, 2015 in Goodwood, McLaren 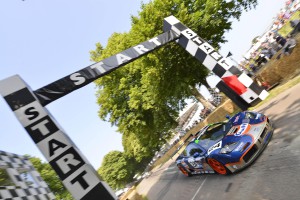 High-speed demonstrations at the famous Goodwood Motor Circuit will take place on both days of the event, with 15 examples of the incredible F1 GTR already confirmed and more set to follow in both short and long-tail specification.

Unprecedented success followed, with a debut victory at the Le Mans 24 Hours in 1995 plus back-to-back crowns in the BPR Global Endurance Championship, further titles in Britain and Japan, and more international victories for the even faster, long-tail version.

The Harrods-liveried car in which Derek Bell and his son Justin finished third at Le Mans in ’95 will appear at Goodwood, as will long and short-tail versions carrying a variety of different colour schemes, including those from West, Gulf and FINA.

Other significant cars include Nick Mason’s unraced development machine, which the former Pink Floyd drummer will drive, and the Gulf car in which Bellm and Maurizio Sandro Sala won BPR races in 1995, and which was subsequently taken to the ’96 British GT crown.

The British GT-winning long-tail ‘EMI’ car, an ex-Bigazzi machine raced by Jacques Laffite at Le Mans, and Ralf Schumacher’s race-winning Lark version from the 1996 Japanese GT series, have also been confirmed among a prestigious list of entries.