By westernadmin on January 16, 2015 in Volkswagen 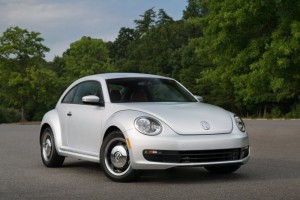 When the New Beetle Volkswagen arrived in 1998, it created a whole new class of automobile. Retro became trendy, and stylists the world over took notice.

In 2011, the Volkswagen Beetle took this design one step further, showcasing a blend of old-world looks with modern technology.

At the 2015 Montreal Autoshow (Jan. 16-25), Volkswagen Canada took the next step, unveiling the all-new Beetle Classic.

On the outside, there is no mistaking the resemblance to the Beetle of yesteryear. Its 17″ Heritage alloy wheels very much looking the part of traditional Beetle fitment. The shape of the Beetle is unmistakable and inside the look is retro with a modern touch. 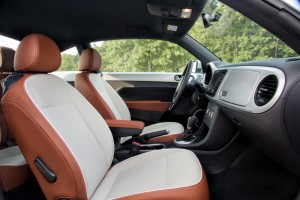 Special two-tone cloth and leatherette seats in a chequered brown-and-beige colour are stylish and comfortable. The colour-coding continues to the dashboard, which perfectly matches the car’s exterior.

The look may be classic, yet the features are as modern as can be.

The Beetle Classic is powered by Volkswagen’s award-winning 1.8L turbocharged engine, which produces 170-horsepower and 184 lb. ft. of torque.

Transmission choices include a smooth-shifting manual or six-speed automatic with Tiptronic.

Available in four classic colours, the Beetle Classic is priced from $21,990 and is available now.