By westernadmin on March 28, 2014 in Motorsport, Rallying, Subaru 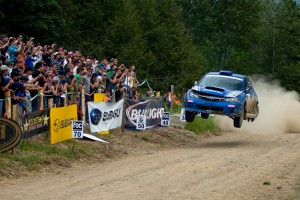 The new partnership will extend over three years and solidifies Patrick Richard and Rocket Rally Racing as the official Subaru Rally Team Canada.

The Canadian Rally Championship is comprised of six events held nationwide in a season that extends from February to November. The series is presented by Subaru Canada, supported by Yokohama Tire Canada and features a contingency program from Subaru Canada.

Rocket Rally Racing will custom build two all-new 2015 WRX STI for use at the six annual events, as well as other special events and public display.

“It is an honour to solidify having four time Canadian rally champion Patrick Richard at the helm of our Subaru Rally Team Canada,” said Ted Lalka, vice president of product planning and marketing, Subaru Canada, Inc. “Mr. Richard brings a wealth of knowledge in both building sound rally vehicles and being behind the wheel of them, giving us confidence at each and every event we participate in.”

“I’m thrilled to be able to renew the relationship with Subaru Canada, as I’ve been working closely with them over the last 13 years and think it’s a fantastic partnership for the sport of rallying within Canada,” said Richard. “The Rocket Rally team is going to be working hard over the next few months to hopefully have the new 2015 WRX STI fully prepared for Rallye Baie Des Chaleurs and I’m truly excited to get behind the wheel.”

The next Canadian Rally Championship event, Rallye Baie Des Chaleurs, takes place in New Richmond, QC, between June 28 – 29, 2014. Subaru Rally Team Canada placed second at Rallye Perce-Neige, the first event of six through the championship, which was held in February.