By westernadmin on January 7, 2014 in Mini, Rallying 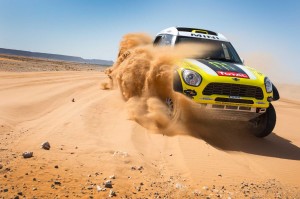 On only the second day of the 2014 Dakar Rally, Stéphane Peterhansel (FR) behind the wheel of his #300 MINI ALL4 Racing entered by the Monster Energy X-raid Team enjoyed a compelling run through the 433 timed kilometres of the second Dakar leg.

The 11-time Dakar champion and winner of the 2012 and 2013 Dakar in the MINI ALL4 Racing sealed the day victory, 28 seconds ahead of Carlos Sainz (ES), which also propelled him into the overall lead of the 36th Dakar edition.

Apart from Peterhansel’s strong performance, the second leg which took the 145 competitors in the cars category from San Luis (AR) to San Rafael (AR) was also a good one for Petershansel’s team-mates. Heading into day 3, a total of six MINI ALL4 Racing rank in the top ten of the overall classifications with Nasser Al-Attiyah (QT) in third, Joan “Nani” Roma (ES) in fourth and Orlando Terranova (AR), who was Sunday’s top driver in a MINI ALL4 Racing, in fifth. Krzystof Holowczyc (PL) is eighth and Federico Villagra ( AR) tenth. 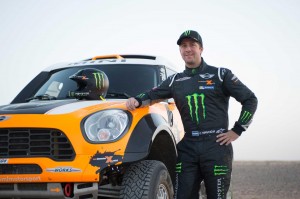 Stephane Peterhansel with his MINI All4 Racing vehicle. Peterhansel made his Paris Dakar Rally debut in 1988 in the motorcycle category.

“All I can say is congratulations to Stéphane Peterhansel and the Monster Energy X-raid Team,” said Jochen Goller, senior vice president MINI. “Today it became clear again how well-prepared the whole team is. The performance of the MINI ALL4 Racing was superb again. Now, I am keeping my fingers crossed for the challenges ahead, while I am confident that we will see more good results during the upcoming days.”

A total of 11 MINI ALL4 Racing compete in the 2014 Dakar. All are based on the MINI John Cooper Works Countryman, modified by the factory-supported X-raid Team to meet the high demands of the Dakar Rally which is today’s pinnacle of off-road motorsports.

With a combination of power, reliability and efficiency the MINI ALL4 Racing proved its competiveness right from its first Dakar start in 2011 while also winning the hearts of the fans from the word go.

On only its second Dakar appearance, the MINI ALL4 Racing made the big breakthrough by winning the 2012 Dakar Rally.

In 2013 the MINI brand proved that its Dakar success was no flash in the pan by defending its title at the first attempt.

This year, the X-raid Team and the MINI brand are aiming at clinching their third consecutive Dakar title when the 2014 Dakar ends in Valparaiso, Chile, on January 18, 2014.