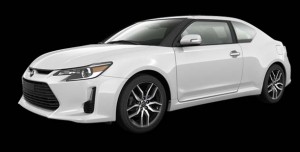 All you have to do is spend a few minutes at www.scionsessions.ca and enter the “Guess The Polaris Music Prize” contest. Just pick which of the 10 finalists will win the Polaris Music Prize. All the entrants who correctly choose the winner will be automatically entered into a random draw for a two-year lease on a 2014 Scion tC.

The Polaris Music Prize, presented by Scion Canada, celebrates Canada’s music album of the year. The 2013 winner will be announced on September 23 at a gala event at The Carlu in Toronto. Shortly after that ceremony, Scion will hold the draw to determine the winner of the tC lease. You can submit your entry online anytime between August 7 and September 22.

“Scion owners tend to be youthful, free-spirited people who are some of the most knowledgeable and enthusiastic supporters of cutting-edge music in this country,” said Cyril Dimitris, director, Scion Canada. “It will be exciting for us to award a new music fan with a lease on a 2014 Scion tC – an outstanding car that fits with their lifestyle and through customization allows them to express their individuality.”

Backed by Toyota, Scion is the exclusive Canadian distributor of Scion tC, xB, xD, iQ and FR-S vehicles through a sales and service network of 88 dealerships across Canada.

The 2014 Scion tC comes with room for a driver and up to four friends, plus 60/40 split folding rear seats to make more room for gear. Factory-equipped with a full range of performance, style, convenience and safety features, the tC powers through the urban landscape thanks to a 179 horsepower, 2.5L four-cylinder engine.

Full details of the contest, which is open to all legal residents of Canada, are available at the Scion Sessions website.  Scion Sessions is Scion Canada’s program to support Canadian artists on original music releases, concert tours and performance videos.

The following are the 10 finalists for the 2013 Polaris Music Prize:

·        Nanaimo, B.C.-born soul/jazz songwriter Zaki Ibrahim, for Every Opposite

·        Hamilton folk-rock duo Whitehorse, for The Fate of the World Depends on This Kiss

The 2013 Polaris Music Prize winner will receive $30,000 award. The winner will be selected by an 11-person jury that judges solely on artistic merit, without consideration of genre or sales.

View all posts by westernadmin →
Lexus to compete in 2014 Japanese Super GT with new vehicle
2014 Jaguar F-Type: Well worth the wait