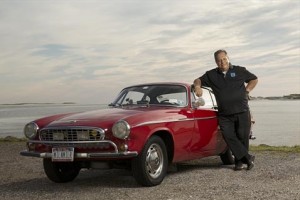 In a journey that has lasted nearly half a century, spanned the globe and elicited awe from generations of car lovers, Long Island’s Irv Gordon has a phenomenal achievement in his sight: driving 3,000,000 miles in the same car – a shiny, red 1966 Volvo P1800.

When he drove off the lot in 1966, Gordon began a movement. That movement continues to grow through the collective experience and passion of current Volvo owners. As Gordon approaches the milestone, Volvo Cars of North America (VCNA) is bringing the nation along for the journey.

Consumers can visit 3MillionReasons.com for additional information about Gordon’s story and a map and image gallery from his road trips. Volvo lovers can also submit their own reason to believe.

“The best way to explore America is by car,” Gordon added. “I challenge everyone to go out and see as much as possible. Find your own journey and reason to believe because you only have one life to live. No matter how many roads I’ve been on, there’s always one I haven’t taken. That’s what makes it exciting.”

Gordon, a 73-year-old retired science teacher from Patchogue, N.Y., holds the Guinness Book of World Records recognition for most miles driven by a single owner in a non-commercial vehicle, and has driven more than 2.99 million miles in his shiny red Volvo.

“I bought my Volvo P1800 on a Friday, and immediately fell in love,” Gordon recalled. “I couldn’t stop driving the car. It was a long holiday weekend, and I brought the car back to the dealership the following Monday for its 1,500-mile service.”

With a 125-mile round-trip daily commute, a fanatical dedication to vehicle maintenance and a passion for driving, Gordon logged 500,000 miles in 10 years.

Besides being a Volvo, one of the main reasons the car has lasted so long is that Gordon has brought his P1800 to the same certified Volvo technician for more than 15 years. Nino Gambino, a technician with an “A” rating at Volvoville in Huntington, N.Y., the same dealership where Gordon purchased his car in 1966, said, “Because Irv follows the owner’s manual and truly cares for and loves his car, I have no doubt he’ll reach three million. Irv always says he takes better care of the car than himself! And he’s fun to ride with on trips because you don’t need a map.”

In 1998 with 1.69 million miles, Gordon made the Guinness Book of World Records for most miles driven by a single owner in a non-commercial vehicle. In 2002, he drove the car’s two-millionth mile down Times Square to international media attention. For more information on Gordon’s journey, visit 3millionreasons.com/timeline.

As Gordon points his car to its three-millionth mile, “I’m realizing this will be a record that no one will surpass,” he said. “So, these next few thousands of miles will be special and sentimental for me. I’m looking forward to visiting my favorite places in big, beautiful America – from national parks to roadside cafes, from the Pacific Coast Highway to small roads that are miles from the Interstate. Send me an invite and maybe I’ll meet you for a cup of coffee.”

Based on his calculations, Gordon plans to reach three million miles in Alaska in September 2013. America’s last frontier is one of two U.S. states Gordon has never visited and a fitting backdrop for his three million mile moment.”For every mile Irv has logged in his Volvo, there have been just as many reasons why he’s been able to do it – from his meticulous care, on-schedule oil changes and his safe driving practices – all the way to Volvo’s legendary attention to engineering,” said John Maloney, president and CEO of Volvo Cars of North America. “A distant predecessor to today’s models, the Volvo P1800 and Irv are the living embodiment that Volvos are enduring and designed around you. We look forward to following him on this journey, and finding ways to bring our customers and car enthusiasts everywhere along for the ride.”