By westernadmin on June 18, 2013 in Collector Hobby 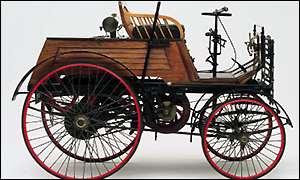 A couple of years ago, when I visited Malvern Link, Worcestershire, England, to perform one of my pilgrimages to the Morgan factory, I stopped at a small newsagent to pick up a few classic car magazines. In talking with the shopkeeper, she mentioned that her shop used to be an automobile factory.  I looked around her small shop with a large dose of scepticism, as I knew the Morgan factory’s first location was further up the road from her location. The shopkeeper only remembered that the manufacturer’s name began with the letter S.

As it turned out it was the home to the Santler Brother’s workshop.

The Santlers are credited with building Britain’s first automobile and one of the first motorcycles.

The sidewalk outside the store sloped down to the street so you could see how they rolled the cars in and out of the building. The shop window used to be the garage door. A photo of the store, home of the original workshop, shows the current name of Mutters Newsagent.

The following article is information available from Wikipedia.

The Santler was a British car built in Malvern Link, Worcestershire, England, between 1889 and 1922. Santler has a good claim to be Britain’s first maker of petrol driven cars.The Santler brothers Charles (1864-1940) and Walter (1867-1942) ran a small general engineering company started by their father in about 1875.

They moved into the bicycle business and in 1887 designed a small steam engine, which they had running in 1889 and installed in a four-wheeled chassis.

All of this work was being done in their spare time while the business moved on to electrical installation with small generators run by steam or gas engines or water turbines.

One of their clients was the mother of pioneering motorist Evelyn Ellis.

Using the expertise gained with small engines, Charles adapted one of the gas engines to replace the steam engine in their experimental car. The fuel was compressed gas stored in a tank under the chassis, but this was heavy and gave the car a limited range.

Around 1894, the engine was replaced by a single cylinder petrol one. There has been some controversy over the exact date this was done but in 1986 it was confirmed by the dating committee of the Veteran Car Club of Great Britain.

The car still exists but not with the original engine.

A new and improved car was built in 1897 but again the work from their main business kept vehicle production as a spare time activity. They may also have made some motorized bicycles.

A further car, a two seater, was made in 1901, still with a single cylinder engine now mounted at the front with belt drive to a central gearbox and chain to the rear wheels. It was subsequently converted to four seats.

There was also a van, but it is not known how many were made. The First World War stopped further developments and the factory was turned over to military work.

After the war, the brothers tried to sell a motor plough they had developed
from 1910 onwards, but this was not a success.

Returning to car production, the Santler brothers brought out a three-wheeler called the Rushabout in 1920, advertised for sale at 165 pounds sterling. This was similar to the car made by the nearby Morgan Motor Company using a front-mounted, air cooled, V-twin engine, but suspension and transmission were not the same.

It was not a success and, in spite of a drastic reduction in price to £85 pounds sterling, did not sell. About 12 were made, but none are known to survive.

The company finally ran out of money and closed in about 1922.

Walter Santler went on to become resident engineer at Ampleforth College, where they had fitted an electric generator in the 1890s.

Charles Santler also left Malvern, moving to New Zealand to work on railway signalling. He returned home in 1939, but was killed by the only bomb dropped on Worcester during the Second World War.