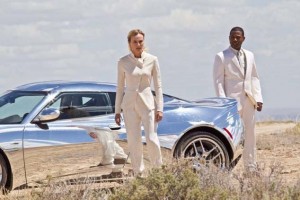 The long awaited movie adaptation of The Host written by Stephanie Myer, author of The Twilight Saga premiered in LA on March 19, 2013 and will be on international release from March 22, 2013, at which time big screens all over the world will be alight with a fleet of awesome looking Lotus Evoras.

The movie follows the plight of Melanie played by Irish actress Saoirse Ronan as she battles an unforeseen enemy lead by Seeker played by Hollywood favourite Diane Kruger. A romantic action-adventure which sees Melanie join resistance fighters as they battle for the survival of the human race, The Host is a tale of spirit, individuality and determination – traits that echo Lotus’ own character.

Treated in a chrome vinyl wrap and fitted with special-effect lighting, the Evoras are driven by the baddies of the piece. It is the mission of The Seekers to rid earth from all human negativity achieving this by invading human hosts and cleansing their minds and erasing their memories to build a neutral race devoid of character and emotion.

Negotiations for a “hero car for ‘Lead Seeker’” started in early October 2011 and by the end of the month Lotus had agreed to provide a number of Evoras to the project directed by its screenwriter Andrew Niccol who was looking for an extraordinary car for the role. The Lotus Evora was chosen for its stunning and futuristic aesthetic, which when juxtaposed with contemporary locations, gives a truly alien element to the Sci-Fi movie.

Lotus has a strong cinematic history; with appearances in two Bond films – in The Spy Who Loved Me out-racing a motorbike and helicopter before taking to the sea as the iconic submersible Esprit, and in a cool role in For Your Eyes Only; “cornering like its on rails” with Julia Roberts at the wheel in Pretty Woman; and taking part in an adrenaline fuelled chase sequence along the San Francisco coastline with Sharon Stone in Basic Instinct.

No doubt the dynamic driving scenes featured in The Host will take their place alongside these exciting movie moments as stand out performances for Lotus.