By westernadmin on November 28, 2012 in Motorsport, Racing 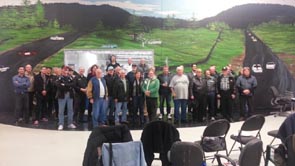 The legendary Westwood Racing Circuit has being immortalized in the form of a giant mural that adorns a wall at Mark’s Auto Body in Coquitlam, B.C.

Former Westwood racers at the unveiling of the giant mural.

The mural measures 30 by 60 feet and honours the glory days of this historic racing venue.

The unveiling of the mural took place on November 13 at Mark’s Auto Body, with many former Westwood racers from the Vintage Racing Club of BC in attedance.

“The mural was done by friend and ever-talented artist Patrick Golding of Golding Arts,” said Dino Milacic of Mark’s Auto Body. “We felt it appropriate to host a formal ceremony to officially unveil the Westwood mural.”

Westwood Motorsport Park opened in 1959 in Coquitlam, B.C., and was Canada’s first purpose-built racetrack. The venue played host to a multitude of racing series, such as the Formula Atlantic Series, Trans-Am Series and Player’s GM Challenge Series.

View all posts by westernadmin →
L’Estage and Richard, 2012 rally champions
2013 BC Historic Motor Races set for May 25-26, one week after the ABFM!