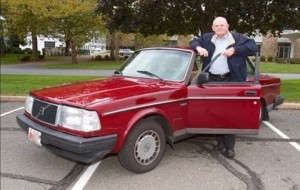 “I never contemplated that I’d reach one million miles,” said Cooper. “I previously had a 1975 Volvo 164-E. When I traded it in, it had nearly 250,000 miles on it, which I thought was outstanding. Needless to say, after that experience, I was not going to get anything other than a Volvo.”

Years of commuting to New Jersey, Washington, D.C. and Philadelphia for work and to pursue a doctoral degree at Temple University steadily piled on the miles. A volunteer fireman for many years, Cooper recalls fondly his trusted mode of transit. “My Volvo 240 took me to the fire station in Hershey, Pa., to respond to calls thousands of times, including a night when the ambient temperature was -22 degrees,” he recalled. “It started right up!”

For Cooper and his family, road trips also contributed to the 240’s growing mileage. There was Halifax, Nova Scotia, at more than 700,000 miles; several diving expeditions to the Florida Keys; and dozens of visits to mountainous western North Carolina. “I’ve never had any trepidation about taking my Volvo on long trips,” he said.

To reach one million miles, Cooper maintained diligent care of his vehicle and followed the service manual. “For 25 years, Mr. Cooper spent many Saturday mornings in our service lounge,” said Ray Bromley, owner of Lehman Motors Volvo. “His commitment to maintaining his car really made the difference over the years.”

“Mr. Cooper’s dedication to his Volvo 240 reflects the loyalty Volvo owners have to their cars,” said Volvo Cars of North America President and CEO John Maloney. “At Volvo, we build cars designed around people. We can’t image a better testament to the safety and longevity of our cars than several Volvo drivers surpassing the one-million-mile mark.”

Cooper has no plans to trade in his high-mileage Volvo. “It does everything I want, and it does it very reliably,” Cooper said. “It’s absolutely my pleasure to drive it. Over the past two decades, this dealership has become like family. Even after moving to Baltimore, I continued to drive 190 miles to Lehman Motors Volvo in Mechanicsburg, Pa., for service. I couldn’t imagine bringing it anywhere else.”

While Cooper may try for a second million, “he’s not too sure he’ll be the guy behind the wheel of it,” joked Mike Danzi, service manager at Lehman Motors Volvo. “Perhaps his son or daughter will assume the driver’s seat.”

Kudos from The Original One-Million-Mile Man

Shortly after reaching the milestone, Cooper met Irv Gordon, the only person to drive nearly three million miles in the same car – a 1966 Volvo P1800. (Gordon, a 71-year-old retired science teacher from Long Island, holds the Guinness Book of World Records recognition for most miles driven by a single owner in a vehicle, and has driven 2.97 million miles in his shiny red Volvo.)

“It was a pleasure to congratulate Selden personally and commend him on the impressive condition of his 240,” Gordon said. “We share a sentiment for the reliability and comfort of our Volvos, and we also share a diligent maintenance regimen and practice preventive care vigilantly. Creating vehicles that can last millions of miles reflects the ingenuity of Volvo’s engineers, but it always comes down to how the owner treats that car.”

Gordon purchased his Volvo in June 1966 and immediately fell in love, driving 1,500 miles in the first 48 hours. With a 125-mile round-trip daily commute, a fanatical dedication to vehicle maintenance and a passion for driving, Gordon logged 500,000 miles in 10 years. Today, Gordon breaks his own record every time he drives, and, like any mighty record-holder at the top of his game, is mindful of his legacy.

“I’m not sure if Selden will ever break my record, but I certainly invite him to go for it,” Gordon said. “There’s so much to explore in this country – and there’s no better way to do so than from the comfortable driver’s seat of a Volvo.”