By westernadmin on September 3, 2012 in All British Field Meet 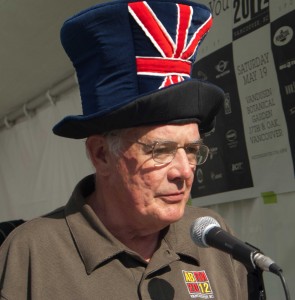 It is with great sadness that Patrick and Joan Stewart publish the following announcement about the passing of Mike Powley.

Mike was one of the faces of the annual Vancouver All British Field Meet at VanDusen, where for the past 19 years he read the more than 180 class awards in his inimitable style.

Mike Powley, wearing one of his British silly hats, deftly MC’d the 62-class (186 awards) Vancouver ABFM May 2012. Powley’s extensive of knowledge of British cars and his affiliation with the Jaguar, MG and Morgan clubs made for insightful comments and an always entertaining presentation.

Mike possessed a larger-than-life personality and was well known for his love of British cars, automobilia and hands-on participation in the Pacific Northwest car culture. He will be sorely missed and always remembered.

POWLEY, Michael David (Mike)
21 November, 1941 – 22 August, 2012
Born and raised in Vancouver, Mike lived life to the fullest. A man who wore many hats, he was well liked by all who knew him. Mike died peacefully at the Peach Arch Hospice with family by his side. He was predeceased by his Parents David Alexander (W/O II, RCAF, KIA) and Mary (Molly). Mike is survived by his loving wife Rosemarie (nee Mulligan), daughter Marianne, son David (wife Renee), and his three grandchildren, Samuel, Regan, and Alexander. No memorial service by request. In lieu of flowers, donations can be made to the White Rock/South Surrey Hospice Society in memory of Mike Powley attn. Residence Fund 15510 Russell Avenue, White Rock, BC V4B 2R3. Published in Vancouver Sun and/or The Province from August 25 to August 26, 2012