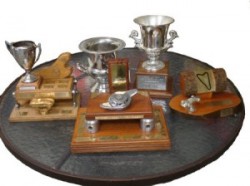 Tom Johnston, Chairman of the Vintage Racing Club of British Columbia’s upcoming British Columbia Historic Motor Races (visit the BCHMR web site: www.bchmr.ca for more info) has announced that the Club has brought a number of old racing trophies out of museums and refurbished them for use at the 2012 BCHMR. The Sports Car Club of British Columbia (SCCBC), the operators of Mission Raceway Park Road Course, the site of the BCHMR, have donated three of these trophies from their artifact collection.

This trophy will recall the roots of sports car racing in this area that were originally planted at Abbotsford Airport – now Abbotsford International Airport. After it was no longer needed by the military, this former World War II training facility was used for a number of different forms of motor sport in the years after the war.

The Abbotsford Trophy was originally created by the SCCBC in 1959 for their annual Production Car Champion. There are four historic names inscribed on the trophy: Peter Heaster for 1959, Mike Procter for 1960, Terry Nilsson for 1961 and Bill Taylor for 1962. The trophy then remained in storage for the next 50 years. At the 2012 BCHMR, the Abbotsford Trophy (and a keeper) will be awarded to the winner of the Third Annual Formula Vee Invitational Race.

Most racing fans know that the SCCBC built and operated the legendary Westwood Racing Circuit from its opening in 1959 until urban growth forced its closure in 1990. One of the most popular features at Westwood was the season-closing endurance race run on the Thanksgiving weekend, almost every year of its existence. In most years, the race was seven (!) hours long, but occasionally other times or distances.

The Westwood Trophy was donated by The Province newspaper to be awarded to the winner of the Index of Performance for the 1971 Province 500 race. This trophy was only presented that one year and the names of the winning team of drivers are inscribed on it: Charly Godecke, Bert Laakmann, Gordon Baron and Nick Feoderhoff. At the 2012 BCHMR, the Westwood Trophy (and a keeper) will be awarded to the winner of the Children’s Charity Grand Prix (the CCGP). This is a race for powerful GT cars of the type that would still be racing around Westwood, if only it was still there.

The SCCBC trophy was originally donated by Castrol Oils Canada Ltd. to be awarded to the winner of the annual Castrol Sports Car Trophy Race. Unfortunately, this race was only run twice, being won by Bellingham’s Pat Pigott in 1959 and by Anne Moore in 1960.

At the 2012 BCHMR, the SCCBC Trophy will be awarded to one of the competitors in Vintage Race Groups 1 and 2 for Production-Based racing cars. However, since the culture of vintage racing focuses on spirited participation rather than on winning outright, the recipient will be chosen by the very knowledgeable Vintage Race commentators based on their opinion of the most commendable performance over the weekend in those two groups.

This award was initially presented in 2011 in honour of Tacoma-based, pioneer racer Pete Lovely who had just passed away. It was by donated by Tom Johnston from his collection of Formula Atlantic awards. The Pete Lovely Memorial Award is presented to the driver in Vintage Race Groups 3 and 4 for Purpose-Built racing cars, who puts on the most spirited performance, in the style of Pete Lovely. The winner in 2011 was the VRCBC’s own Alan McColl with his 1977 Tiga Formula Ford.

This fine example of metalworking was rescued by VRCBC stalwart Ian Wood from a local scrap metal dealer. The Battered Cup is – well – battered. It seems to have had a rather rugged start in life. The Battered Cup will be awarded at the VRCBC’s big Saturday evening Gala BBQ & Banquet to the driver or the car or some combination of the two, that is or was (or perhaps looks most likely to become) battered.