By westernadmin on January 26, 2012 in Auctions, Ferrari 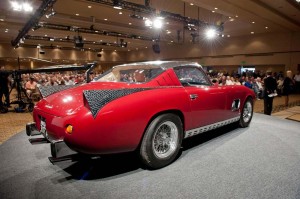 RM Auctions kicked off its 2012 calendar on a positive note in Arizona in January, posting more than $25.5 million in sales (all figures are reported in U.S. dollars and include 10 per cent buyer’s premium).

RM saw a strong 89 per cent sell-through of its auction vehicles at this annual sale in Phoenix.

Now in its 13th year, the well-established auction presented a magnificent roster of 140 blue-chip motor cars – spanning the spectrum of the collector car market – before a standing-room only crowd. Illustrating RM’s global clientele, bidders represented 21 countries around the world, with a strong showing of European enthusiasts.

Headlining the top-sellers list at RM’s two-day Arizona auction was a superb roster of Ferraris, led by the unique ex-Dottore Wax / Greg Garrison 1957 Ferrari 410 Superamerica Scaglietti Coupe, s/n 0671 SA, the only example of the 34 410 Superamericas to have been bodied new by Scaglietti.  The first new Ferrari road car to be bodied by the esteemed Modenese coachbuilder,  0671 SA claimed top honors of the weekend, selling for a strong $1,815,000 to great applause from the crowd.

Cementing RM’s position as a leader in the presentation of important and historic Ferraris at auction, the sale presented no less than 10 examples from the Modenese prancing horse. A 1991 Ferrari F40 Berlinetta with less than 300 miles and originally delivered new to famed auto executive Lee Iacocca, spurred a lively bidding war in the room, achieving a record price of $781,000, while a desirable 1973 Ferrari 365 GTB/4 Daytona Spyder, s/n 16705, offered for the first time in 23 years brought $990,000, and a multi-award winning 1963 Ferrari 250 GT Lusso Berlinetta, s/n 4459 GT, realized $979,000.

In February, RM in association with Sotheby’s will lift the gavel on one of the world’s finest private museums, the Milhous Collection, during a multi-day sale, February 24– 25 in Boca Raton, Florida. Carefully amassed over the past 50 years by brothers Bob & Paul Milhous, the two-day sale will present an unparalleled selection of automobiles, rare mechanical musical instruments and desirable collectibles. For further information including select video and audio highlights visit www.rmauctions.com/milhous.

View all posts by westernadmin →
What Do We Need From the Battery of the Future?
2012 Vancouver ABFM official poster artwork unveiled