By westernadmin on May 30, 2011 in Motorsport, Rallying 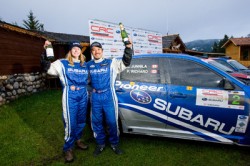 At the podium, Patrick Richard and his new co-driver, Leanne Junnila, finishes in second place at the Rocky Mountain Rally, round two of the 2011 Canadian Rally Championship.

CALGARY, May 30, 2011 /CNW/ – The second rally of the 2011 season, held May 26-27, was a battle to the finish for Subaru Rally Team Canada driver Patrick Richard and new co-driver Leanne Junnila.

The Rocky Mountain Rally, held near Calgary, Alberta, was only the second Canadian Rally Championship event Richard and Junnila have ever competed in together yet the duo managed to lead the rally for most of the day.

Before the start of the rally, organizers were immediately challenged by overnight snowfall that made sections of the rally route impassible. Volunteers worked feverishly to create a new schedule, and the rally started after a three-hour delay.

L’Estage and Richard were first on the road, which meant they would be sweeping the loose gravel and snow from the road surface, making the road faster for the teams behind. Teams completed four passes of the Cox Hill stage before heading to service, where L’Estage hoped for a reseed to put someone else first on the road.

“It was really tough this morning, very bad to be first on the road,” said L’Estage. “In the time where we turned around to do the next stage, the road covered over in snow, so again I had to clear the road.”

Pat Richard struggled as well with the slippery conditions. Running Yokohama mud tires, Richard was confident that they were the correct choice – the same tires chosen by L’Estage.

“In the snowy sections, it’s so slippery that you really have to stay on the line and stay clean,” said Richard. “It’s tough because the camber of the road is so severe that the car will slide sideways down into a corner even if you go slow.”

Benefitting from L’Estage’s road sweeping, Richard moved into the lead, and maintained a small margin heading into service. Teams made repairs and the cars were sent back out to complete two more passes on the Cox Hill stage before heading to the final three stages at the Jumping Pound Forest Demonstration Loop. With no reseed, L’Estage would have to continue first on the road, clearing the worst of the road conditions.

“We beat Antoine on the first stage, which shouldn’t happen,” laughed Urlichich, who had chosen a deep snow tire that allowed him to push harder in the sloppiest conditions. “Of course, after that, he destroyed me on every stage.”

The two-wheel drive cars found the conditions particularly grueling, often struggling for grip. Jan and Jody Zedril (Winnipeg) lost control and slid off the road, losing almost 40 minutes before continuing. Zebe Szewczyk (Calgary) and Shabir Haji (Calgary) also struggled, spinning at high speed and losing time as well. This opened the door for Eric Grochowski (Calgary) and Keith Morison (Calgary) in their VW Golf to take the lead in 2WD.

On the first pass on the Jumping Pound stage, Richard and Junnila hydroplaned at a watersplash and hit a signpost, damaging the right rear corner of the car, and costing 5 seconds of their 8.8 second lead. The next stage, they lost another 5.9 seconds, giving up the lead for the first time in the rally, with just one stage to go. Both Richard and L’Estage drove at the limit over the final stage. L’Estage was again faster, winning the event by 5.3 seconds.

“Antoine was definitely quicker after service,” said Richard. “When we got to the Jumping Pound stage, we had some confusion with our notes and the location of the watersplash, and damaged the car. It’s tough, but it is good to know that we’re competitive and can lead and win a rally.”

Urlichich was satisfied with his result, a comfortable third place.

“We stuck exactly to the plan,” said Leo. “I wanted to continue to learn, and for that of course you need to stay on the road. I’ve had a lot of changes to the car, the notes, and have a new co-driver, so there’s plenty to learn.”

Grochowski and Morison won 2WD, though the pair had concerns over whether they would make the finish.

“We were using an old clutch and it started to slip on the final transit, so we’re happy to finish,” said Grochowski.

Ultimately, the hydroplaning by Richard at the water splash, resulted in his second-place finish mere seconds away from the win.

“New co-driver Leanne Junilla did a fantastic job,” said Richard. “She didn’t make a single mistake all weekend. Between the work that she did and the work that the crews have done, we were able to be very competitive. It’s going to be a tight season. I think this is the closest finish we’ve ever had and there’s nothing much between the top two guys. It’s going to be a fantastic season.”

The next round of the Canadian Rally Championship is the Rallye Baie des Chaleurs, taking place from July 1-2, in New Richmond, Quebec.