By westernadmin on February 18, 2011 in Collector Hobby 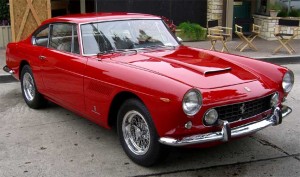 OK . . .OK . . .OK! Once again I realize that this article is going to make many of the purists madder than ruddy march hares, but there is not much I can do about that. Your problem. Try lots of Tums if dyspepsia becomes the problem!

The subject  matter at hand is Continuation Models, Replicas, Nostalgic Recreations, call them what you will—what are they and where do they fit in the grand scheme of things?

Purists amongst you are starting to boil already at the very mention of these rather fine beasts, for some of them are indeed fine, well-engineered beasts, make no mistake about that.

They are not original production line vehicles, I grant you that. They don’t have pedigree or the manufacturer’s stamp or seal of approval; they weren’t made by the same craftsmen and women, but they do exist and they are wonderful, even better-engineered than the originals and they tip their hats to the real thing and allow us to own them for far less. They provide the fun of ownership and an experience of driving without equal. They are safer, stronger and faster than their doppelganger parents and, believe me, they are fun to drive and get the looks too!

Is it or isn’t it, is always the question, and the thrill of even a possible sighting of what might be the real thing raises the heart and summons the blood!

I will be attending, nay on pilgrimage to, Goodwood to write for Western Driver and other publications this year and so I will see the real McCoy enough times to be blasé perhaps, but then I will never race one of those or even drive them. But If I wanted to own, let’s say a C Type Jaguar, a Fraser Nash Le Mans Replica or an Aston Martin DB3S, then by God I could—well something that looks, drives and feels like the real thing anyway.

I once owned a perfect Intermeccanica Porsche Speedster Replica and the most important thing one learns is not to tell porky pies about the car, because it really does underline that parental guidance truism: “Oh, the complex web we weave when we first learn to deceive!”

But hell, if you can get over that temptation, it’s all downhill fun from there and folks even are amazed at the love, care and toil put into the pride of ownership. There is a genuine kick one gets out of seeing even something close to the original beast.

There are many Replicas on the market and it’s a growing segment, too. You can own a Porsche 550, a Lotus XI, a C Type Jaguar, an AC Cobra and a lot of great automobiles in between. They are here to stay purists, so put your hackles down, they do have a place in man’s quest for pleasure and individualism. 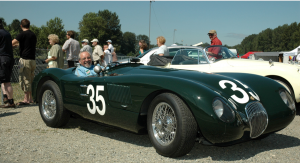 So what are they like? Well they vary greatly in their execution and some even come as kit cars that can give you the satisfaction of the build before the drive.

Author in the ex-Sir Stirling Moss’ C-Type Jaguar at Mission. Remanufactured versions of this iconic Jag can be ordered from Sports Car Centre, Alberta (http://www.sportscarcentre.ca/).

The eternal question is: “Is their really and truly any difference between cutting up a decrepit Riley Monaco and making it a Brooklands racer and building a Fraser Nash Le Mans Replica from the ground up?

One wag once told me: “Mike, you can almost build a genuinely acceptable ticketed vintage race car around a genuine and original ash tray.” I know some that almost have, but my lips are sealed!

Trying to answer the question of what they are like is impossible, because some even house the original engine and suspension and others, such as the WAM DB3S has BMW running gear. Therefore, the cost and the performance can vary greatly, but I think it might be safe that none are just downright bad. Of course, another stupendous relief is not having to worry about driving a priceless original.

Alone and magnificent there she sits polished like a Guardsman’s boots at the Trooping of the Colour, a Ferrari 250 GTE Testa Rossa! You catch your breath, such beauty, such beast! You sense the crunch of gravel underfoot through your thin leather driving shoes as you approach and start to pull on your fine leather driving gloves and snug your flat hat down a bit tighter on your head and then open the driver’s door. Swinging in to the cupped seat you are held firmly, feet planted on the pedals, a quick check around, Yes that’s all fine! Then it’s ignition on and you turn the firing key, magic! Pure bloody magic!

The sound of the four trumpeted, chromed exhausts fills the evening air, a few frightened birds head lickety-split for cover and the unique smell of Castrol R wafts on to the gentle breeze and the Webber carburettors from Bologna hiss, piss and suck mixture in to the heart of the warbling V12. You sharply press the accelerator pedal and the engine responds with a throaty shout not unlike a Joe Cocker classic on steroids—rough, loud, rude and perfect. Now you’ve won the evening, you are ready to capture the road, apply your long-learned skills and life is sweet, so sweet you can taste it with ease. Firmly holding the Nardi wood-rim wheel, you carefully observe the moving Jaeger instruments telling you the information you want and need to know….is she ready? Is she warm and comfortable? Seems so. One last look at the dials and with the sound of a slick-click you move the gear stick into first….this is it! 270 bhp furious and ready horses to imprint their Scuderia hooves on to the receiving tar macadam, a quick throttle blip to 6,000 rpm for no reason—perhaps just because you can and damn it you wanted to! Then with a solid feel out comes the clutch, first picks up the torque and for one wonderful moment you are Mr.Toad and the wind is not in the willows but curling high in circles behind you, giving shape to the air as the dust casts shapes in the rear view mirror. The wheels spin, you grin as down the gravel you go—more throttle, why not, because you can! And you turn left, with the slightest tire squeal on to the road to anywhere!

Give it some stick and enjoy yourself, don’t hold back, no time for losers, time only for driving and the sheer skill of it all every second. It doesn’t get any better than this….ever!

Now let me tell you that was a 500TRC Replica, based around a GTE drivetrain and suspension, with four-pot ATE callipers, a stiffer and safer triangulated rear, with a superb non-pontoon Scaglietti body in delicious Ferrari Rossa. Yes, it might have cost $300,000 to build, but compared with the four-million dollars you would have to pay for a ‘real’ one it’s a snap (and by the way unless you are automobile royalty, you just won’t find one, and even if you do they won’t sell it to you. “The right crowd and no crowding,” unless you’re one of them. Know what I mean? But you can have the feeling, they can’t take that away from you! The emotional value is there in spades!

Now, after that drive you just took don’t tell me that there isn’t a place for….well…. the other side of the coin if you catch my drift.