By westernadmin on March 18, 2021 in Electric Vehicles, Porsche 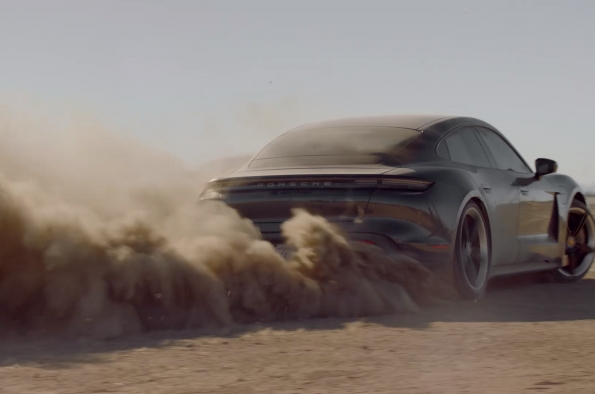 Keanu Reeves and Alex Winter test the Porsche Taycan in “Going the Distance.”

In this action-packed short film, Porsche enthusiasts and fellow actors Keanu Reeves and Alex Winter embark on an epic road trip in Southern California in two cars, with one charge of electric, to showcase the driveability of the Taycan.

Throughout the film Reeves and Winter are given challenges under supervision of professional drivers on closed course roads, which test both friends’ driving skills to their limits, as well as the Porsche Taycan.

Racer and stunt driver Tanner Foust makes a guest appearance for the first stop in the film, giving Reeves and Winter the chance to experience the thrill of Launch Control in a Taycan Turbo.

The pair round off their experiences on the Porsche Experience Center Los Angeles track to attempt to outdo the Taycan’s drift record.

The Taycan Turbo is at the core of the Taycan line up—capable of accelerating from a standstill to 60 mph in just three seconds. It is equipped with four-wheel drive and, through its twin electric motors, has a combined 670 horsepower.

The Taycan is available to be tested on track and to their limits at the Porsche Experience Center Los Angeles and Atlanta – more information can be found at www.porschedriving.com.

Shelby Mustang Prototypes featured in new documentaries
Electrification: is this the future of racing?