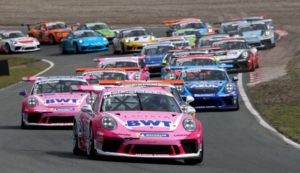 Thirty years in the making, the Porsche Carrera Cup North America is scheduled to debut in 2021.

This premier one-make race series in Canada and the U.S. will utilize a combination of the latest yet-to-be-unveiled Porsche 911 GT3 Cup race car and Michelin Pilot Sport Cup N3 racing slick to challenge the best road and street racecourses on the continent.

“For those aware of the Carrera Cup tradition worldwide, they will understand that this is a new and unique series to anything we have ever had in North America,” said Dr. Daniel Armbruster, president/CEO, Porsche Motorsport North America. “Carrera Cup is the ultimate regional step in the one-make championships globally.”

As with all national Carrera Cups worldwide, Porsche, through Porsche Motorsport North America (PMNA), will manage the single-driver per-entry series.

Opening its season in March 2021 at Sebring International Raceway, the Porsche Carrera Cup North America will take its place as the pinnacle of one-make cup championships on the Porsche Motorsport Pyramid in North America. Brian Blocker of PMNA has been named the Series Manager by Dr. Daniel Armbruster, CEO & president, PMNA.

The inaugural season of the championship will host 16-rounds at eight venues in Canada and the eastern United States. Each 45-minute race will count toward a season-long driver and team championship in each of three classes: Pro, Pro-Am and Rookie.

All drivers can contend for Pro class victories but must utilize the newest Porsche 911 GT3 Cup race car to do so. The Pro-Am class is eligible for “Gentlemen” drivers – a driver who does not make a primary profession of automobile racing. A driver in the Pro-Am category may use the newest machine or the previous generation.