In 1964, the Monte Carlo Rally was still a genuine adventure for all the competing racing drivers and the spectacle was broadcast live on television. This was the era when automobile manufacturers all over the world discovered rally sport as the perfect stage for presenting their models. And consequently, vehicles from different weight and performance classes competed against each other with a handicap formula providing appropriate compensation when allocating points. 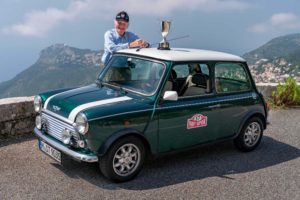 Driving fun typical of the brand is still the passion of the racing driver, now 87 years old. And he continues to relish the challenge of winding country roads.

When Hopkirk, now 87 years old, talks about his tour de force driving the classic Mini at that rally, with start number 37, the fascination of classic motor sport immediately comes alive.

“The Mini was a very advanced motor car,” said Hopkirk. “Its front-wheel drive and the transversely mounted engine at the front presented significant advantages, just like the fact that the car was small given that the roads had lots of bends and were narrow,” explained Hopkirk as he recalled his greatest triumph.

A Ford Falcon was powered by eight cylinders and had a lead of 17 seconds. Hopkirk had stowed a can of caviar in the toolbox of his Mini Cooper S and he had just mastered the “Night of the Long Knives” in a rumbustious drive.

Incidentally, the caviar originated from Minsk. In the winter of 1964, Hopkirk and his English co-pilot Harry Liddon started out from Minsk in the Monte Carlo Rally, which at that time commenced as a star rally from nine different European cities. The six Mini works cars and the other vehicles in the starter field only met up in Rheims, France. At that time, Patrick or “Paddy” Hopkirk was already able to look back on an impressive career in which he had won hillclimb races and come out victorious five times in the Circuit of Ireland.

Hopkirk had also attracted attention in the Tulip Rally staged in the Netherlands, the Austrian Alpine Rally and the Safari Rally.

In 1962, he crossed the finishing line driving a Sunbeam Rapier in third place in the overall placings of the Monte Carlo Rally. And because he had such a taste for adventure and had never driven on Soviet roads, Hopkirk registered voluntarily to start the race in Minsk in 1964.

He started off successfully, and along the country roads in France a duel quickly developed between Hopkirk driving the Mini Cooper S and Swedish driver Bo Ljungfeldt in the Ford Falcon. The showdown came on the Col de Turini and this was destined to presage the ultimate outcome for the race.

On the day before, there had been a big snowfall and this significantly slowed down powerful and heavy vehicles steered by competing drivers. However, this wasn’t the case for the little challenger.

According to Hopkirk: “The Mini performed particularly well going downhill, and the tests had all been uphill and down dale so that we were able make good anything we lost going uphill when we were driving downhill.”

Everything else was dealt with by the handicap formula. Ljungfeldt made up 17 seconds during the “Night of the Long Knives” and gained a lead of half a minute in the final circuit race on the Monte Carlo Grand Prix track, but this was not enough to displace Paddy Hopkirk from his position as number one in the overall placings. At the finishing line, it took some time before all the times had been compared and all the points had been totted up. However, ultimately the first overall victory achieved by the classic Mini in the Monte Carlo Rally was established.

The surprising coup won acclaim worldwide, and feverish celebrations followed in the United Kingdom. The classic MINI became a motor-sport legend and Paddy Hopkirk shot to fame as the United Kingdom’s most illustrious rally driver overnight. After the winner’s podium ceremony, driver and vehicle were repatriated to the United Kingdom where they starred in the immensely popular TV show of the time, Sunday Night at the London Palladium. Fans, celebrities and even the British Government sent telegrams to convey their congratulations. Hopkirk’s most treasured memorabilia include an autograph card from the Beatles with the message: “Now you are one of us, Paddy!”

The MINI Cooper S continued to dominate the Monte Carlo Rally in subsequent years. Hopkirk’s Finnish teammates Timo Mäkinen and Rauno Aaltonen, who had taken places four and seven in 1964, succeeded in driving the Mini Cooper S to second and third place in the overall standings in 1965 and 1967, respectively. Rally fans named the trio The Three Musketeers. In 2010, they were all welcomed as the first members of the Finnish Rally Hall of Fame.

In 1967, Hopkirk took sixth place in the overall standings and in the following year he crossed the finishing line of the “Monte” in fifth place. However, it was inevitable that the golden era of this diminutive adventurous runabout was coming to an end, particularly since the competition had been busily working on developments. Hopkirk changed to other models and won a number of races including the Acropolis Rally.

In 1968, Paddy Hopkirk highlighted his reputation as a fair sportsman and gentleman in the London-Sydney Marathon when he and his co-pilot Tony Nash stopped their Austin, which was in the lead, in order to rescue a team from their burning car that had been involved in a serious accident.

At the beginning of the 1970s, Paddy Hopkirk retired from professional rallying and built up a career importing automobiles to his homeland of Northern Ireland and the sale of accessory products sold under the brand named after him.

He was also involved in the relaunch of the MINI brand as a consultant to the BMW Group.

The veteran rally driver still engages in a wealth of honorary activities to this day.

During his active driving career, Hopkirk supported a large number of road safety campaigns and he is still involved today as an ambassador for the charity organization IAM RoadSmart.

His commitments also include working on the Board of Management of the British Racing Drivers’ Club and supporting WheelPower, an association dedicated to promoting wheelchair sport.

In 2016, Paddy Hopkirk received the award of Member of the Order of the British Empire from Princess Anne.