By westernadmin on March 2, 2020 in All British Field Meet, Classic Cars, Collector Hobby 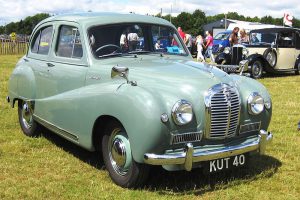 Beginning in 1932, Vancouver-based Fred Deeley Motors was the distributor for Austin cars in the province of British Columbia.

In the late 1940s, when Austin was about to release its brand-new Devon A40 equipped with an economical 1200cc four-cylinder overhead valve engine coupled to a four-speed transmission, Deeley convinced the manufacturer to build a left-hand-drive ‘export’ model. These export models included real leather seats, and many were equipped with a sunroof.

Once the cars started arriving in Vancouver and Victoria they began to sell like hotcakes, with Deeley selling 1,250 Austin A40s in 1948—the first year of production.

By 1950, sales moved into the stratosphere with a total of 5,186 Austin cars sold. Imported by the shipload, they appeared to be everywhere.

From 1948 to 1952, total sales of Austin vehicles in British Columbia were worth $15 million to the 40 Austin dealers throughout the province. Deeley was the most successful dealer, selling one of every three imported Austin vehicles through sales outlets in Vancouver and Victoria.

The Austin A40 was Britain’s number one export product earning $70 million in its first four years of production. The company was turning out a car every 44 seconds.

During this period, Austin cars were the most popular models to be seen on the streets of both Vancouver and Victoria, but there was a dark day on the horizon.

On April 28, 1952, the Dutch ship Dongedyk caught fire in Vancouver harbour. The freighter was carrying 50 Austin A40 Somerset models. The Vancouver fireboat showered saltwater on the freighter to extinguish the fire, causing water damage to some of the vehicles. 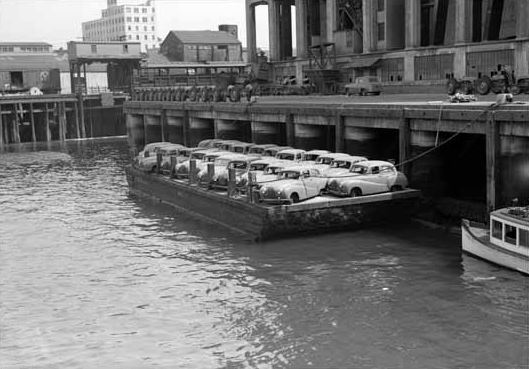 On May 9, 22 of the most severely damaged Austin vehicles were loaded on a barge and taken out through English Bay to be dumped at the entrance to Howe Sound. The tugboat River Ace used a cable to pull these new vehicles off the barge. Some valuable items, such as batteries and wheels, had been stripped from the vehicles prior to be dumped. 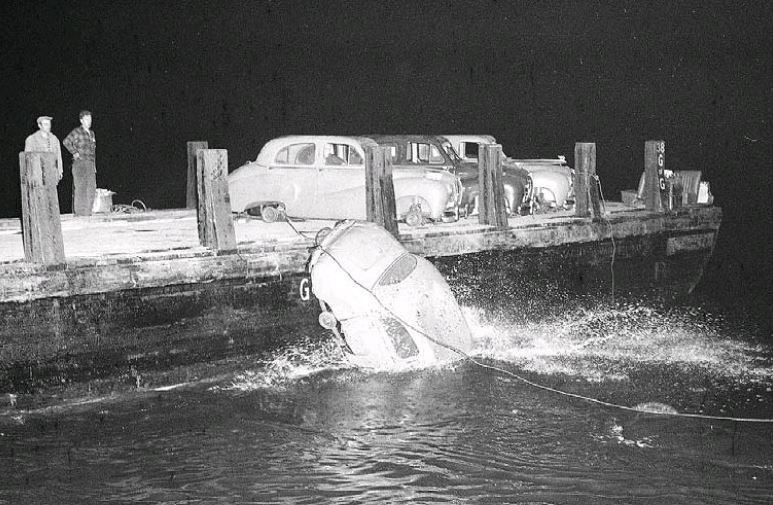 Photographer Robert O. Bentley captured the dumping of the vehicles in Howe Sound with his historic shots, now part of the Dominion Photo Studio collection in the Vancouver Public Library.

A spokesperson for Austin of England, owner of the vehicles, was quoted in a Vancouver Sun story about the Austin car dump saying: “We don’t want anyone to have any doubt in his mind when he buys a car. We ‘re making sure no one claims his car is acting up because it was damaged in the fire.”

A subsequent article, written after a tugboat crew was spotted spending a day dragging over the dump spot, warned people who may have wanted to go ‘fishing’ for a new car that “the legal situation is ticklish. The ownership is still vested with the company that had them dunked.”

For the next 25 years, Austin continued to ship cars to Canada, with the Austin Mini and later the Austin Marina being sold from 1972 to 1978. But, with the introduction of the hardy, economical and reliable Volkswagen Beetle, the glory days of Austin’s market dominance in Canada ended in 1953.

By the mid-1960s, the introduction of North American compact cars into the marketplace further pushed Austin cars into the background.

See an Austin A40 Somerset and more than 500 other British classics at The Greatest Show on British Wheels, ABFM 2020, Saturday May 16, VanDusen Garden, Vancouver.