By westernadmin on June 28, 2019 in Bentley, Electric Vehicles, McLaren 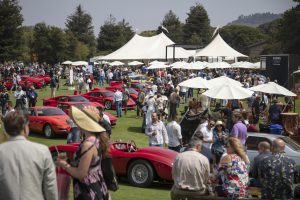 The Quail, A Motorsports Gathering will once again grace the picturesque fairways of Quail Lodge & Golf Club with more than 200 of the collector car world’s finest and rarest motorcars as part of Monterey Car Week on Friday, August 16, 2019.

Three new classes celebrating legendary automotive milestones will be the centerpiece of this year’s event: 100 Years of Bentley Motors, 25th Anniversary of the McLaren F1, and A Tribute to the Electric Car Movement,  along with six international culinary pavilions, fine wines, and a family-friendly atmosphere. The luxury-lifestyle event will also feature an array of classic automobiles and motorcycles from the world’s most preeminent sports and racing brands.

100 Years of Bentley Motors will celebrate a century of the storied British marque with unique examples including a 1929 Le Mans, a 1926 Speed Six, a 1958 S1 Continental Coupe by Park Ward, and a 2018 Supersports.

The 25th Anniversary of the McLaren F1 special class will highlight some of the finest examples of the legendary supercar including the 1997 F1 GTR Longtail chassis number 27R, one of only 10 GTR Longtails ever made and the first to win a race.

A Tribute to the Electric Car Movement is set to feature historic and rare examples of electric automobiles throughout their history, including a rare pair of experimental Volkswagens: an electric 1964 Microbus and the 1965 Volkswagen Beetle Zelectric Sedan. All three displays will complement the 2019 event themes alongside a host of traditional classes including Pre-War Sports and Racing, Custom Coachwork, Supercars, and The Great Ferraris.

One of the standout vehicles at this year’s event will be the rare 1966 Cheetah owned by Mark Boen. The last of only 12 original Cheetahs ever produced and considered the most original in existence, this car is the only one to have a 1966 model designation. Originally designed as a Chevrolet-powered competitor to the contemporary Shelby Cobras in sports car competition, Chevrolet canceled its involvement in the planned 100-car production run after only 12 cars were produced despite promising early results.

As always, the show will offer a family- and pet-friendly environment. Guests will be treated to a unique garden-party setting highlighted by the array of culinary pavilions, award-winning wine vendors, and a Fireside Chat Series. Guests will also be invited to attend the Bonhams Quail Lodge Auction taking place concurrently on the Quail Lodge Farm Field.