By westernadmin on June 28, 2019 in Aston Martin, Electric Vehicles 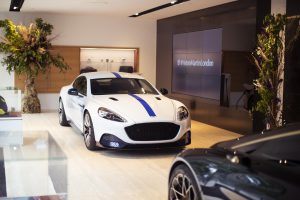 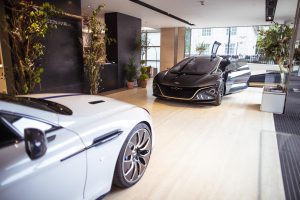 Relaunched as the world’s first zero emission luxury brand in 2018, Lagonda plans to change traditional thinking and take full advantage of the latest advances in electrification and autonomous driving technologies.

Sitting nose-to-nose were the company’s first electric sports car, Rapide E and its all-electric Lagonda Vision Concept. With the Lagonda Vision Concept unveiled at the Geneva Motor Show in 2018 and Rapide E at the Shanghai Automotive Show in 2019, the Electric Future event provided the first chance for the UK to preview the company’s future technologies.

“When we relaunched Lagonda, we set ourselves an ambitious target to be the world’s first luxury electric brand,” said Marek Reichman, chief creative officer at Aston Martin Lagonda. “We see the Lagonda brand sitting within a unique niche in the market. It is for the high-end luxury customer who wants to explore and be autonomous while remaining mindful of the impact they are having on the environment. Lagonda will achieve this, but it will also provide joy and delight to the people who get to enjoy its unique internal environment.”

Currently on the market, the Aston Martin Rapide E is the first battery electric vehicle (BEV) produced by the famous British marque. It will enter production at the end of 2019 at the company’s second manufacturing facility and the marques Home of Electrification, St Athan which is based in Wales.

With a limited run of just 155, the same number as the vehicle’s electrically limited top-speed, the project has been completed in partnership with Williams Advanced Engineering.

Featuring twin electric motors that produce 610PS and 950Nm of torque, Rapide E will be capable of reaching 0-60mph in less than four seconds. With performance characteristics tuned to match or exceed those of the original V12 model. Capable of achieving 0-60mph in under 4 seconds and a 50-70mph time of just 1.5 seconds.

Survey shows more B.C. parents relying on others to drive their kids
Acura NSX to set the pace at 2019 Pikes Peak