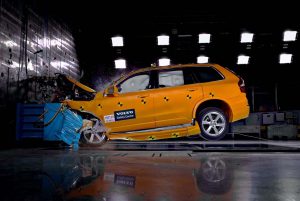 Volvo XC90 tests a frontal crash. Volvo is for the first time making its safety knowledge easily accessible in a central digital library, which it urges the car industry to use, in the interest of safer roads for all.

Volvo Cars is sending a strong signal about the dangers of speeding and will limit the top speed on all its cars to 180 kilometres per hour from 2020.

The company’s Vision 2020, which aims for no one to be killed or seriously injured in a new Volvo by 2020, is one of the most ambitious safety visions in the automotive industry.

But acknowledging that technology alone will not get its driver safety vision all the way to zero, Volvo Cars is now broadening its scope to include a focus on driver behaviour.

Research by Volvo Cars has identified three remaining concerns for safety that constitute so-called ‘gaps’ in its ambition to completely end serious injuries and fatalities in its cars, with speeding a very prominent one.

Apart from limiting top speeds, the company is also investigating how a combination of smart speed control and geo-fencing technology could automatically limit speeds around schools and hospitals in future.

While speed limits are in place in most western countries, speeding remains ubiquitous and one of the most common reasons for fatalities in traffic. The problem with speeding is that above certain speeds, in-car safety technology and smart infrastructure design are no longer enough to avoid severe injuries and fatalities in the event of an accident.

Millions of drivers still receive speeding tickets every year and traffic accident data from the National Highway and Traffic Safety Administration shows that 25 per cent of all traffic fatalities in the US in 2017 were caused by speeding.

People simply do not recognize the danger involved in speed, says Jan Ivarsson, one of Volvo Cars’ leading safety experts.

Beyond speeding, two other problem areas constitute gaps toward Volvo’s Vision. As obvious a problem as speeding (and as difficult to end) is intoxication. Driving under the influence of alcohol or drugs is illegal in large parts of the world, yet it remains a prime reason for injuries and fatalities on today’s roads.

The other area is distraction. Drivers distracted by their mobile phones or otherwise not fully engaged in driving are another major cause of traffic fatalities. In many ways, they are equally dangerous as drunk drivers.

Together, speeding, intoxication and distraction constitute the main ‘gaps’ towards Volvo Cars’ vision of a future with zero traffic fatalities and require a focus on human behaviour in the company’s safety work, as well.

For example, in Canada, there were more than 69,000 impaired driving incidents reported by the police in 2017. According to Mothers Against Drunk Driving (MADD) Canada, an average of four people are killed each day in crashes involving alcohol and/or drugs.

Volvo Cars believes intoxication and distraction should be addressed by installing in-car cameras and other sensors that monitor the driver and allow the car to intervene if a clearly intoxicated or distracted driver does not respond to warning signals and is risking an accident involving serious injury or death.

That intervention could involve limiting the car’s speed, alerting the Volvo on Call assistance service and, as a final course of action, actively slowing down and safely parking the car.

A driver monitoring system as described above is an important element of allowing the car to actively make decisions in order to help avoid accidents that could result in severe injuries or death.

Introduction of the cameras on all Volvo models will start on the next generation of Volvo’s scalable SPA2 vehicle platform in the early 2020s. Details on the exact number of cameras and their positioning in the interior will follow at a later stage.

Volvo wants to start a conversation about whether car makers have the right or maybe even the obligation to install technology in cars that changes their drivers’ behaviour. Both the speed limit and the installation of in-car cameras illustrate how car makers can take active responsibility for the aim of achieving zero traffic fatalities by supporting better driver behaviour.

Volvo Cars has also revealed the Care Key, which allows Volvo drivers to impose limitations on the car’s top speed on all cars from model year 2021, before lending their car to others.