By westernadmin on November 29, 2018 in Porsche 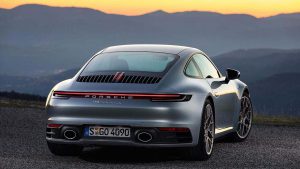 The turbocharged flat-six engine of the 911 Carrera S and 911 Carrera 4S now produces 443 horsepower—an increase of 23 hp over the previous models.

The eighth generation of the Porsche 911 is here.

On the eve of the 2018 Los Angeles Auto Show—November 30-December 9—the new 911 celebrated its world premiere.

With an exterior that unmistakably reflects the Porsche design DNA, a more muscular look and a completely new interior layout, the new 911 is both timeless and modern.

The exterior design has been revamped and underlines the leap in performance of the new Porsche 911.

At the front, the body width has increased by 45 millimeters (1.77 inches), making room for a wider front track. 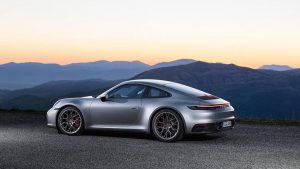 Correspondingly, the rear body width on both 911 Carrera S and 911 Carrera 4S has increased to 1,852 mm (72.91 in), the width of the previous 911 Carrera 4 and 911 GTS models. The rear is dominated by the significantly wider, variable-position rear spoiler and the seamless, elegant light bar which is now a feature on both two- and four-wheel drive variants.

Flush integration of the electric door handles that extend outward when needed emphasizes the tapered and smooth side contour.

Between the new LED headlights, the front luggage compartment lid with pronounced contours evokes the design of the first 911 generations. The rear is dominated by the significantly wider, variable-position rear spoiler and the seamless, elegant light bar which is now a feature on both two- and four-wheel drive variants.

Apart from the front and rear fasciae, the entire outer skin is now made of aluminum.

A completely new interior is characterized by the clear and straight lines of the dashboard with recessed instruments. Porsche 911 models from the 1970s provided the inspiration here. Left and right of the centrally positioned tachometer, which is characteristic for Porsche, two thin, frameless, free-form displays provide the driver with information.

The Powertrain control module (PCM) can be operated quickly and intuitively thanks to the new architecture. Located underneath the screen, a compact switch panel with five buttons provides direct access to key vehicle functions. In terms of digitalization, the 911 is more connected than ever before thanks to new functions and services. The standard PCM system features Porsche Connect Plus including online traffic information based on swarm data. (A subscription is required after an initial 12-month trial period.)

As a world first, Porsche has developed the Wet Mode, which is included as standard equipment on the new Porsche 911. This function detects water on the road, preconditions the stability control and anti-lock brake systems accordingly, and warns the driver.

A camera-based warning and brake assist system, also fitted as standard, detects the risk of collision with moving objects and initiates emergency braking if necessary.

The models can be ordered now and are expected to reach dealers in summer 2019.