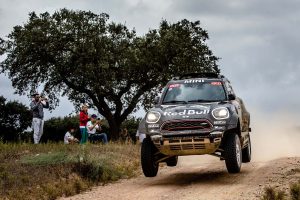 MINI Motorsport partner X-raid will field five MINI John Cooper Works Rally at the 41st edition of The Dakar, January 6-17, 2019. The five vehicles have already completed pre-Dakar tests and are now en route to Peru, South America, the chosen arena for the toughest long-distance cross-country event on the 2019 rally calendar.

Over the course of the 2018 rally calendar, the X-raid-supported cars and crews have had a successful year.

The Silk Way Rally 2018 (Russia edition) was one of two notable wins for Yazeed Al-Rajhi (KSA) and his co-driver Timo Gottschalk (GER), the second being winners of Rally Kazakhstan.

The Spanish pairing of Joan “Nani” Roma and Alex Haro took three wins in 2018 – Baja Portalegre 500, Turkmen Desert Race, Hungarian Baja. As a former winner of Dakar in both car (2014) and motorcycle (2004) categories, Roma is still hungry for Dakar success.

Waving the flag for Argentina in a third MINI JCW Rally will be the crew of Orlando Terranova and Ronnie Graue. Their win in the desert conditions of the 2018 Desafío Inca will stand them in good stead for Dakar 2019, where the heat and sand will be pivotal to determine the front runners in the early stages.

Joining the crews will be the experienced duo of Boris Garafulic (CHI) and co-driver Filipe Palmeiro (POR). All four crews will run at Dakar under the banner of X-raid MINI JCW Rally Team.

The fifth MINI JCW Rally to run at Dakar will be with the ORLEN X-raid Team crew of Jakub “Kuba” Przygonski (POL) and co-driver Tom Colsoul (BEL). Four wins in nine outings helped Przygonski secure the 2018 FIA Cross Country Rally World Cup championship title – and, the young Polish star claims he is more than ready for the 2019 Dakar.