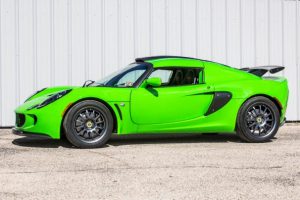 Dan Kruse Classics, one of the world’s classic car auction houses has sold the Lotus Exige S260 Sports Couple, formerly owned by comedian and television star Jerry Seinfeld, for $90,400 at the May 30, 2017, Forth Annual Midland-Odessa Auction hosted by Dan Kruse Classics.

The fastest to, from and around the track model, the 2009 Lotus Exige S260 Sports Coupe was a special order in Kawasaki green.

Aside from the Lotus Exige, Dan Kruse Classics also offered 175 other classic vehicles over the Memorial Day Weekend. View video of vehicle being auctioned here: https://youtu.be/xG3-FXb-H-o