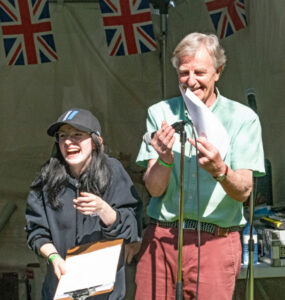 Patrick Stewart, the co-event organizer of Vancouver ABFM, shares a laugh with one of the youth judges from Young Guns Garage.

The 2022 Vancouver ABFM (All British Field Meet) at VanDusen Botanical Garden ended the day with an Awards Ceremony that began with a lead-in by pipers Rosalie MacDonald and Ember Schira from the British Columbia Regiment Irish Pipes and Drums (affectionately referred to as “The Irish”).

Patrick Stewart, co-organizer of the Vancouver ABFM, thanked the sponsors and vendors whose involvement and financial support made the event possible. The volunteers and marshals, headed by the various club members under the direction of Mike McChesney—who worked organizational wonders with his spreadsheet layouts. And the VanDusen staff, under the leadership of Sinfor Wong, for the use of the unique and beautiful Garden venue.

Stewart also thanked the car entrants for showing up in style and continuing to make the event “The Greatest Show on British Wheels.”

He acknowledged Ron Kubara and the Vancouver Lotus Club members for a  record number of 48 Lotuses on the field, including a 1991 Lotus-developed Opel Omega/Vauxhall Carlton, with a 282km/h performance, bettered by only a handful of exotic supercars.

Stewart also mentioned the number of Triumph Stags, English Fords, and Jaguar E-types that showed up to celebrate their anniversaries, having been denied their rightful celebratory years because of the COVID-19 pandemic. 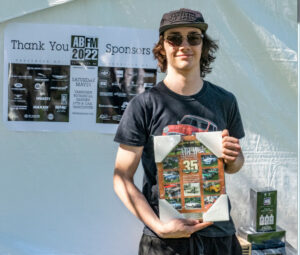 Judges’ comments: This is a fun, functional and educational vehicle for the next generation of classic car mechanics. The Mini addiction is being passed on for good (or bad), depending on how tricked-out one likes a classic Mini. 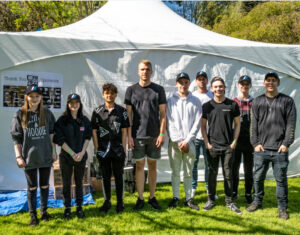 Continuing the youthful theme, Stewart introduced some members of Young Guns Garage, a program by Youth Unlimited that provides connection and hands-on skills through an automotive community. Young Guns Garage manager Chad Gelderman and Tyson Moore from Hagerty Insurance directed the group through the judging process of a select number of cars on the field. Their choice for the YOUTH JUDGING AWARD was Car #299 from North Saanich: Barry McCallan’s 1975 Jensen Interceptor. 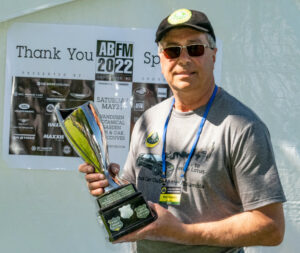 This year was the 5th year the Vancouver ABFM celebrated excellence in volunteer work with the EDD AWARD, awarded in memory of Edd Langelier. The award went to Lotus Club BC president Ron Kubara in recognition of his leadership of the ever-growing Lotus Club and its members. Stewart remarked, “I remember when it was a struggle to have six Lotuses on display a the show—now look at the incredible number on the field today.” 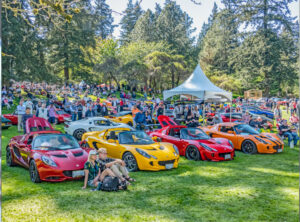 The LEWIE AWARD recognizes someone who has contributed significantly to the classic car and automotive industry. Since 2002, some 18 worthy enthusiasts have received the award. This year’s recipient leads a double life between running a successful media relations company and buying, selling and restoring collector cars. 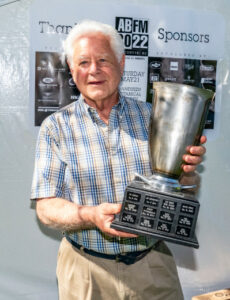 Alyn Edwards is the 2022 recipient of the Vancouver ABFM Lewie Award for a lifetime of writing, preserving and promoting the classic car hobby.

As a young man, Edwards wanted to be a car designer but couldn’t draw, so he began writing as a newspaper reporter in Toronto, followed by a move to Global TV as a TV reporter and, after 20 years, joined the CBC network.

His media relations company, serving a full roster of clients, produces dozens of documentary videos. Still, the car world best knows him for his many years of writing about collector cars and their owners in his weekly Vancouver Sun newspaper columns.

Edwards has a life-long passion for old cars and is happiest in the restoration workshop caring for his extensive 30-car collection, performing shop tours for fellow enthusiasts or on the hunt for his subsequent acquisition. 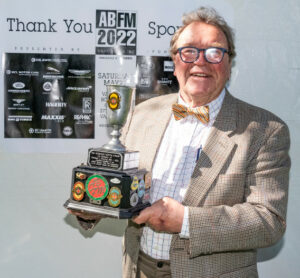 Allen grew up around his father’s automotive dealership in Northern Ireland (still part of Britain). As a youth, he had the enviable job of driving all makes of cars as a car jockey— during his school and university holidays. He has been judging the Vancouver ABFM Debuting Restoration cars for the past 10 years, was involved in the Harrison Hot Springs classic car show and is a four-time Mayor of that community. 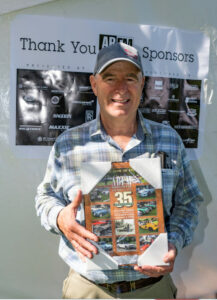 sponsored by Shell/Pennzoil, thanks to Shell regional manager Andrew Campbell, who provided a case of Pennzoil for all winners of the sponsors’ awards.

The winning vehicle must be 1989 or prior and as close as possible to when it left the factory—allowance made for regular mechanical repairs. CAR #438 from Vancouver, BC: John Timms, 1981 Panther J72, Convertible.

Judges’ comments: This is a well-cared-for, unrestored vehicle in excellent condition. 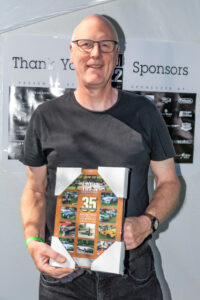 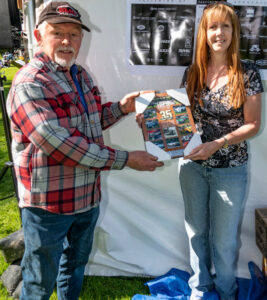 Judges’ comments: A well-executed restoration on this MGB GT Coupe, topped off with an excellent paintwork finish. 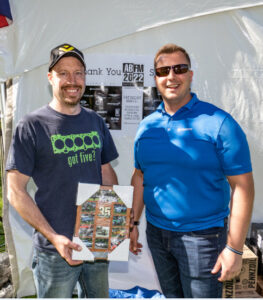 The two-year hiatus of the Vancouver ABFM due to the global pandemic allowed car owners to complete many projects, resulting in more than a third of the cars new to the event this year. 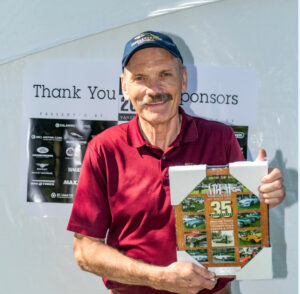 Judges’ comments: This was a challenging judging category with so many excellent first-time entrants at the show. This Jaguar 3.8 S-Type, with its exquisite attention to detail, is an obvious labour of love. 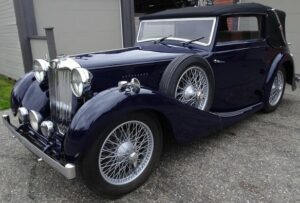 The ‘Neatest Little Car’ is not too difficult to recognize, and this year, no surprise, the award goes to CAR #20 from Delta, BC: Steve & Susan Blake, 1939 MG VA DHC Tickford.

Judges’ comments: Anyone seeing this classic will immediately recognize why it is deemed the ‘Neatest Little Car’ at this year’s Vancouver ABFM. 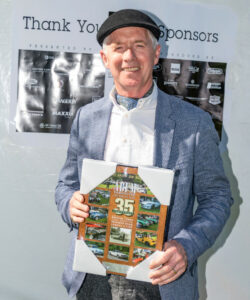 Judges’ comments: To paraphrase English painter William Hogarth: ‘the line of beauty is essential to elegance.’ This Jaguar XK120 is an outstanding example of graceful form married to the expression of power, speed and consistency in every dimension. 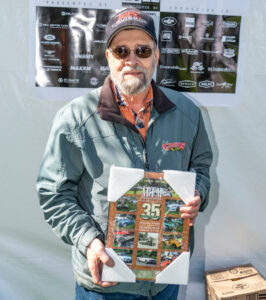 Judges’ comments: Chevy custom chassis and custom everything on this English Ford. 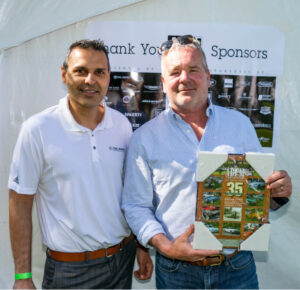 ENTRANTS CHOICE OVERALL: The most popular car on the field, as voted for by all car entrants. Sponsored by MCL Motorcars, part of the Dilawri Group that represents four British-built brands: Jaguar, Land Rover, Aston Martin and Bentley, has attended and supported this event from its inception. Thanks to marketing manager Surj Uppal for the dealership’s significant support over the years.

Tom Arnott with the Best Motorcycle Overall Award for his 1954 DMC P200 Mk 1.

Judges’ comments: This is a beautiful and extremely rare bike. 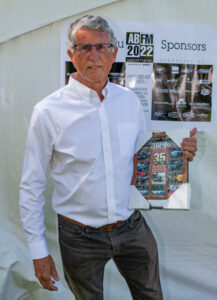 Mel Hildebrandt accepted the Long Distance Driver Award on behalf of his wife Kristie and himself.

LONG DISTANCE AWARD: Recognizing the longest distance driven to the Vancouver ABFM in the entrant’s classic car is a well-earned distinction and identifies specific characteristics in the owner—hardy, knowledgeable about the car’s mechanics and a true enthusiast. While several long-distance drivers came from Alberta and Saskatchewan, the 2022 long-distance driver(s) made it to the show from California, driving 2,439 kilometres. 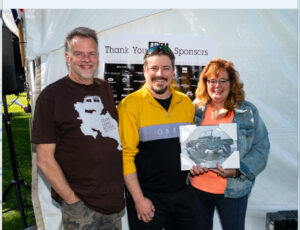 David & Pamela Blair from Abbotsford epitomize the Land Rover Spirit, having spent years preparing for the many places they have travelled to in their Land Rover.

award for the Land Rover that is the most unique, vintage, original or special-purpose with characteristics that exceed all others in its class.

Judges’ comments: This is a well-travelled Land Rover—Vancouver to the Yukon and south to Panama City. Years spent in preparation for travel. That’s the Land Rover ‘Spirit’ at its best! 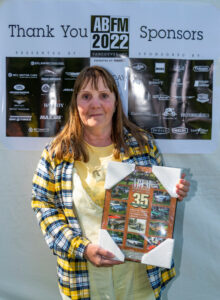 And that’s a wrap for 2022. Thanks to all the sponsors, the VanDusen Garden personnel, and all the entrants who waited patiently for two years to attend, we thank you for your support.

Until we meet again on Saturday, May 20, 2023, have a great summer of safe and happy motoring.