By westernadmin on July 29, 2016 in Motorsport, Racing 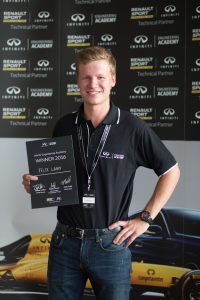 For the first time ever, a university student from Canada has been awarded the career opportunity of a lifetime in Formula One, as Infiniti announces Felix Lamy as the first Canadian winner of the Infiniti Engineering Academy 2016.

Having been selected from thousands of entries and beating nine other finalists from around the country in an action-packed event at Luciani Infiniti retailer in Montreal today, 21-year-old Felix Lamy from Gatineau, Quebec will move to England, UK, in November 2016 to begin a dream 12-month placement working with Infiniti and the Renault Sport Formula One Team.

Lamy, who is a student at McGill University will spend six-months working at the Formula One team’s headquarters in Enstone and six-months working at Infiniti ‘s European Technical Center in Cranfield. With F1 Technology more relevant to the automotive industry than ever, he will play a key role in the ongoing transfer of technical knowledge and expertise between the Renault Sport Formula One Team and Infiniti.

“I am absolutely ecstatic to land the job I had previously thought was out of reach before learning about the Infiniti Engineering Academy—working in Formula One,” said Lamy. “The competition was fierce, the nine other finalists were all very impressive in different ways…I still can’t quite believe it. Working in the United Kingdom with Infiniti and the Renault Sport Formula One Team is going to be an amazing experience and I look forward to all of the challenges that come along with it.”

The INFINITI Engineering Academy, now in its third year, is a one-of-a-kind global search for the world’s best up-and-coming engineers. For 2016, seven placements have been made available with one winner chosen each from Canada, USA, Mexico, Europe including Russia, United Arab Emirates, China and Asia–Pacific to work with the team. This is the first year that Canadian students have had the opportunity to participate in the Infiniti Engineering Academy.

This unique automotive-to-motorsport training program for brilliant young engineers, possible thanks to Infiniti ‘s Technical Partnership with the Renault Sport Formula One Team, has attracted 4,108 registrations from 44 different countries. A number of previous winners have gone on to secure full time careers in the automotive and motorsport industries.

After a series of interviews, 10 Canadian finalists were selected to attend the selection event in Montreal. They were put through their paces in a structured assessment day by a panel of judges from Infiniti and Renault Sport Racing.

Most looking forward to about living/working in the UK: The UK has such a rich history of technical innovation in the aerospace and automotive domains. I would be very excited to have the opportunity to be part and hopefully play an important role in one of those industries. Living in the UK will also provide me the opportunity to learn more about the British Life and Culture.

Greatest strength: My ability to listen, especially to other’s comments and ideas.