The Audi R8 Coupe has been named 2016 World Performance Car in the World Car Awards.

With a total of four awards, the Audi R8 is the most successful model in the history of the World Car Awards. The predecessor to the R8 had already taken home two World Performance Car awards and a World Car Design of the Year award in the prestigious competition. Now the second generation of the high-performance sports car from Audi was able to win over the international jury of 73 leading automotive journalists. 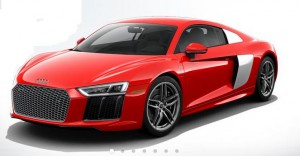 The Audi R8 Coupe V10 plus exterior is characterized by numerous finishing touches in carbon.

The genetics of the Audi R8 contain the know-how acquired from numerous wins by the brand in auto racing—the sport prototypes have won the 24 hours of Le Mans 13 times since 2000, and the R8 LMS contributed seven more overall victories in 24-hour races since 2009.