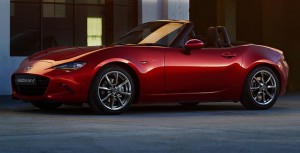 The Mazda MX-5 was declared the 2016 World Car Design of the Year at a press conference held today (March 24, 2016) hosted by the New York International Auto Show, Bridgestone Corporation, and Autoneum, a leading producer of vehicle acoustics and thermal management systems.

The World Car Design of the Year category, and the corresponding award, are meant to highlight new vehicles with innovation and style that push established boundaries.

Candidates for the design award may be on the overall World Car of the Year list or may be included as a stand-alone entry provided the vehicle is available in quantities of at least 10 in one major market during the period beginning January 1, 2015 and ending May 31, 2016.  Candidates may be pre-production or all-new production.

A design panel consisting of six highly respected world design experts was asked to first review each candidate, and then establish a short-list of recommendations for the jurors.

The design experts were: 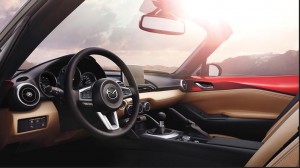 The fourth-generation 2016 MX-5 with SKYACTIV Technology is all about beautiful proportions and driver excitement.

The experts commented: “The new MX5 design is exciting, distinct and fresh. It’s a design that wholly fits with being the unique small sports-car this Mazda is.  It captures the spirit of the first generation MX5 design but introduces a very leading twenty-teens aesthetic whilst remarkably also connecting visually to its sibling designs. An exceptional design in all ways, Mazda opted for modern, progressive direction to redefine the 4th generation MX-5. It visually communicates agility, light weight and maintained the MX-5 heritage.  It still looks MX-5 100 metres away, only this one instantly recognizable as 4th generation at that distance.”

The Road to World Car began in Frankfurt on September 15, 2015, was followed by a four-and-a-half day stop in Los Angeles for test-drives of the North American, Japanese and Swedish contenders in November, continued in Geneva with the Top Three in the World announcement, and finally ended with the declaration of the winners in five categories at the 2016 New York International Auto Show.

The Mazda MX-5 took the top award over the Jaguar XE and the Mazda CX-3.