By westernadmin on March 1, 2016 in General News 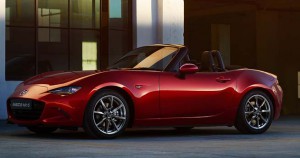 2016 Mazda MX-5 vying for World Car of the Year honours along with Audi A4 Sedan / Audi A4 Avant and Mercedes-Benz GLC.

The Road to World Car journey continues with the Top Three in the World finalists in five award categories announced at the March 2016 Geneva International Motor Show.

A jury of 73 distinguished international automotive journalists selected the following “Top Three in the World” finalists by secret ballot based on their experience with each candidate as part of their professional work. The international accounting firm KPMG tabulated the jurors’ ballots.

The Top Three in the World finalists in the five award categories are as follows:

The Road to World Car began in Frankfurt on September 15, was followed by a four-and-a-half day stop in Los Angeles for test-drives of the North American, Japanese and Swedish contenders in November, and continues with the Top Three in the World announcement.

The journey ends at the New York International Auto Show on Thursday, March 24, 2016 when all winners are declared.