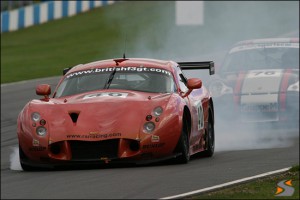 TVR T400R, last produced in 2005. Details of the engine for the new TVR, revealed on Oct. 7, 2015, include an engine being based on the Ford Coyote 5.0L V8, with modifications by Cosworth including lighter flywheel, dry sump and unique engine management to generate from 450 to beyond 500 bhp depending on the variant. Photo: TVR 2004 by dailysportscar.com. Licensed under CC BY-SA 4.0 via commons.wikimedia.org.

The iconic British sports car maker, TVR, has announced that carbon fibre construction options will be available when the car goes on sale in the coming months.

TVR will offer a lightweight carbon fibre composite structure to feature on its latest full-production model, thanks to the revolutionary techniques of design legend Gordon Murray, and has confirmed that its initial limited edition production run of cars will feature carbon construction as standard.

Famous for his design leads in F1 and on road cars, Gordon Murray has developed an innovative ground effect aero chassis and body package using his innovative iStream manufacturing methods. iStream Carbon allows TVR to produce a stand-alone tub and shell made from carbon fibre composite at a fraction of the cost that other methods allow.

“Historically, carbon fibre has been reserved for motorsport and high-end supercars, but now TVR will be offering customers a slice of that technology at a fraction of the price,” said Les Edgar, chairman of TVR. “The spotlight has been on us from the start, and with the help of Gordon Murray Design and its innovative processes, we have made sure that our new sports car can really shine and deliver beyond expectations. The carbon manufacturing process really is a game changer, and one I’m delighted to offer to all of our early adopter Launch Edition customers within the package cost. I am sure those models will be much coveted, but carbon will continue to be available as a cost option.”

The 300-plus customers who have already placed a deposit have been notified that all Launch Edition models made will be produced with the carbon fibre option. Subsequent cars produced will be available to be specified with the carbon fibre option package, with pricing to be confirmed. Both carbon fibre and the standard composite construction will be manufactured using iStream design and manufacturing techniques, which simplifies the assembly process to allow greater flexibility as well as reducing cost and increasing the car’s safety and rigidity.

“From early on it became apparent that there was no reason why we couldn’t develop a carbon fibre chassis structure for the new TVR at a lower cost than manufacturing processes previously allowed,” said Gordon Murray, chairman, Gordon Murray Design. “Our iStream Carbon technology is the world’s first affordable, yet high volume, carbon fibre chassis and body structure and sets new standards in the automotive industry for chassis lightweighting, rigidity and safety. I am delighted that TVR is able to offer a carbon fibre option and bring the lightweight TVR principle back to life in a very exciting contemporary way.”

TVR’s product and launch programme will see at least four new models in the market over the next decade.