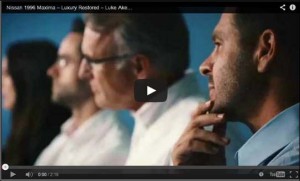 “Luxury” has been restored in the 1996 Nissan Maxima originally discovered in a viral Sept. 2013 Craigslist ad.

Following months of major reconstructive surgery, Nissan rejuvenated the vehicle back to its original condition and has responded to the advertisement with a tongue-in-cheek video of its own, highlighting the “finer points” of the near two-decade old Maxima. The new video, entitled “Luxury Restored,” is now available for viewing on the Nissan YouTube channel.

In 2013, Luke Aker posted his 1996 Nissan Maxima car for sale on Craigslist for the reasonable price of $1,400. To cut through the clutter, Aker created an outstanding one-minute film, presenting the “finer points” of his sedan. Clever camera work paired with a dramatic soundtrack made for an overnight viral success.

Nissan saw the ad and quickly jumped at the chance to buy such a gem.

Shortly after taking possession of the car, Nissan placed the fate of the car in the hands of its social media following. The votes were tallied and the fans decided that a complete restoration was in order, as well as a prominent display at Nissan’s North American headquarters in Tennessee. 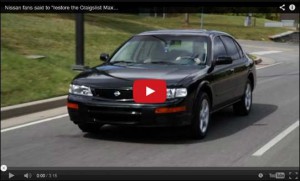 “This Craigslist ad was hilarious and incredibly well done, so we jumped at the opportunity to pick it up and have some fun with it,” said Erich Marx, Nissan Director of Interactive and Social Media Marketing. “Thanks to an overwhelming response from the online community, we decided to do a full restoration to the vehicle, ultimately resulting in this playful video.”

Aker worked with Nissan to create the new “Luxury Restored” video, which follows the original theme closely with dramatic shots and even a British narrator – which of course adds instant credibility to any advertisement. 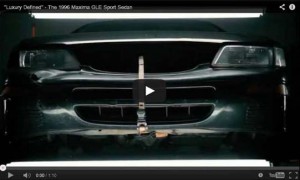 The video closes with the factory-fresh 1996 Maxima ready for its next, extraordinary adventure.