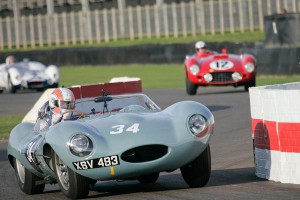 Jaguar D-Types from all around the world have been invited to take part in the Lavant Cup at the 2014 Goodwood Revival meeting; a race exclusively for the legendary racer.

The famous three-time Le Mans-winning machine has always had a strong presence at the September meeting, having won the Sussex Trophy in 2006 and 2013, but this year’s event will see as many as 30 examples take part as Goodwood celebrates the car’s 60th anniversary; a record gathering of D-Types on a racing grid.

The 2014 race at Goodwood will feature not only the ‘long-’ and ‘short-nosed’ versions, but also some examples of the XK-SS (the road-going version) and even the E2A prototype, which was a link between the D-Type and the E-Type and spent much of its life in the United States.

The 2014 Revival will run from September 12-14, with the Lavant Cup taking place on Saturday, September 13.