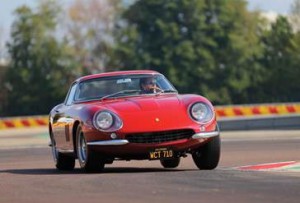 Calling all Steve McQueen fans. RM Auctions, the world’s largest collector car auction house for investment-quality automobiles, will lift the gavel on the 1967 Ferrari 275 GTB/4 formerly owned by the “King of Cool” at its flagship Monterey sale, which returns to California from August 15-16, 2014.

Sporting a distinctive shade of metallic gold called Nocciola, the vehicle on offer, chassis 10621, was special ordered by Hollywood Sport Cars for Steve McQueen in 1967, while he was filming The Thomas Crown Affair.

McQueen, known for lightly customizing his cars, sent the car to be repainted Chianti Red prior to taking possession. He also requested that 10621 be fitted with the Borrani wire wheels from his beloved 275 GTB N.A.R.T. Spider, which was a victim of an unfortunate earlier crash, as well as equipped with a custom-designed driver’s side rear view mirror, a retractable radio antenna, and custom seat trim.

Once complete, McQueen took delivery of the car while on the set of his legendary 1968 crime-drama Bullitt. It remained the only Ferrari in his renowned stable of sports cars for almost five years, before passing onto fellow actor Guy Williams, of Zorro and Lost in Space fame, in 1971.

After passing through a small number of other respected owners, 10621 was eventually purchased by its current owner in 2010, who commissioned Ferrari Classiche to complete a full restoration, returning the four-cam to McQueen’s personal specification.

In March 2013, Ferrari signed an agreement with the owner to display the car in Museo Ferrari as part of the “From Cinecittà to Hollywood, all Ferraris in the Cinema” exhibition, featuring other Ferraris associated with the silver screen. Chassis 10621 proved so popular with visitors that it has remained a feature attraction at the Maranello museum.

“When it comes to cars with celebrity provenance, it doesn’t get any better than a Ferrari owned by Steve McQueen,” said Max Girardo, managing director, RM Auctions, Europe. “The vehicle we have on offer ticks all the boxes when it comes to collectability: it is one of the ultimate Ferraris ever built; it was recently restored by Ferrari themselves; and it was delivered new to none other than the “King of Cool.” We’re both honoured and excited to have been entrusted with the sale of this special car by its owner. There’s no doubt that it will be welcomed by the world’s most selective concours events and prove to be the centerpiece of any collection. We anticipate great interest in its offering, as we continue our strong track record for Steve McQueen cars in Monterey.”

The McQueen Ferrari leads an exceptional group of other coveted examples from the famed Italian marque at RM’s upcoming Monterey sale. Additional notable highlights include:

In 2013, RM’s Monterey auction generated an extraordinary $125-million in sales, entering the history books as the highest grossing collector car auction of all time. This year’s event will present an elite, handpicked selection of more than 100 blue-chip collector cars.

For further information, to discuss limited consignment opportunities, or view a frequently updated list of entries, visit rmauctions.com or call 519 352 4575.