By westernadmin on April 25, 2014 in Collector Hobby 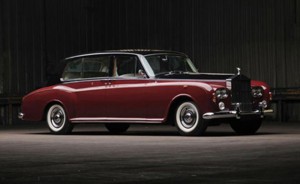 A group of more than 450 classic cars – the largest single collection to be auctioned from Canada – is set to cross the block at Auctions America’s Auburn Spring, Indiana on May 8-10, 2014.

The John Scotti Collection predominately comprise American muscle cars from the ’60s and ’70s, but also includes a number of iconic British, Japanese and German models, all of which are offered with no reserve.

Wearing the highest estimate is a 1970 Rolls-Royce Phantom VI Limousine, which is expected to fetch $130-160,000. The two-tone example has covered just 43,500 miles and is described by the vendor as being one of the the finest in the world. It features a powered window divider and burr walnut trim throughout.

At the other end of the price spectrum is a 1950 Chrysler New Yorker, which is expected to cost its new owner as little at $15,000. As American as apple pie and mispronouncing ‘Leicester’, it makes an understated alternative to the chrome and fins symptomatic of the decade, and looks to be superb value.