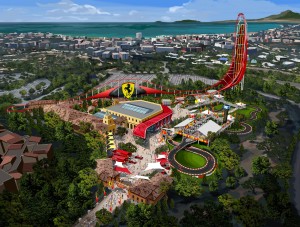 Port Aventura Entertainment S.A.U., a subsidiary of European investment group Investindustrial, has signed a licensing agreement with Ferrari to build Ferrari Land, a new Prancing Horse theme park, inside the Port Aventura resort and theme park outside Barcelona in Spain.

Ferrari Land will cover 75,000 square metres and include a variety of new and exciting attractions for Prancing Horse enthusiasts of all ages, including Europe’s highest and fastest vertical accelerator. An opportunity for the whole family to experience and discover the world of Ferrari.

The first Ferrari-themed hotel is also to be built inside Port Aventura and will be a luxury five-star establishment with 250 rooms, restaurants and a driving simulator.

The project will involve an overall investment of 100-million-euro and the Ferrari theme park itself officially opens in 2016.

Port Aventura already welcomes 4-million visitors a year, of whom 50 per cent come from outside Spain.

Acquired in 2009 by Investindustrial, Port Aventura is now the Mediterranean’s top amusement park as well as the second-ranked in Europe, thanks in large part to an investment of more than 125-million-euros spread over a four-year period in addition to the initial sum invested in the purchase.

View all posts by westernadmin →
Transforming Formula One: 2014 rules explained
Motorcyclists who ride with their dogs