By westernadmin on October 25, 2013 in Auctions 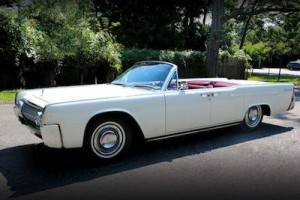 The Lincoln Continental used to transport the Kennedys in from Forth Worth to Dallas, Texa in 1963 sold for $318,000.

The white 1963 Lincoln Continental was used to transport President John F. Kennedy, Jacqueline Kennedy, and Texas governor John Connally from a breakfast and speech at the Hotel Texas ballroom through the streets of Fort Worth to Carswell Air Force Base, where they boarded their short flight to Dallas on the morning of November 22, 1963.

The automobile was painstakingly restored by Lincoln specialist Baker Restoration of Putnam, Connecticut, with the engine having been replaced and body work and paint done as well.

Most of the interior, including the red leather seats, is in its original condition.

Originally built by Hugh, this four-door bulletproof limo features a divider window, passenger air controls, power steering and brakes and a very uncommon two-way telephone in the back seat. 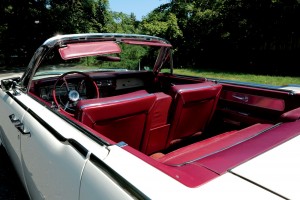 Most of the Lincoln’s interior, including its red leather seats, is in its original condition.

Much of the body has been restored, to the tune of approximately $35,000, however, the interior remains in its original condition, with beige leather seats, matching carpeting, and the aforementioned telephone.

Jim Warlick, owner of the America Presidential Experience, a unique traveling presentation of exhibits that celebrates and brings to life the American presidency, purchased both vehicles.

Warlick plans to add them to his travelling exhibit and said that they can be seen in upcoming special JFK 50th anniversary commemoration event at Love Field in Dallas, Texas.

Further highlights from the auction include:

* A pair of emblem-adorned rotary phones from the presidential suite at the Hotel Texas, which Kennedy used to make his Final Call, sold for $31,200.

* A very rare set of eyeglasses from all three Kennedy brothers, sold for $42,000.

For a complete listing of auction results from Camelot: Fifty Years after Dallas, RR Auctions JFK-themed auction, please go to the RR Auction website at www.rrauction.com.