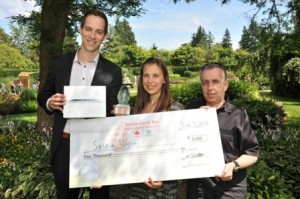 Saskia was selected from a group of 20 regional scholarship winners who were chosen from a pool of hundreds of applicants across Canada. She was recognized for her outstanding achievements in environmental community service, academics and extracurricular participation.

Saskia co-founded and led her high school Green Team with whom she implemented an organic garden and the school’s first composting program. She recently took on a worldwide awareness campaign about the impact of water shortages. As one of seven youth ambassadors for the organization impossible2Possible, she ran a 182-kilometre ultra-marathon across Botswana and connected with over one hundred classrooms across the globe via videos, blogs and live video conferencing to engage them in the topic of water. Saskia is also a peer leader for the Catching the Spirit Youth Society, a National Youth in Parks advisory board member and a volunteer with Mossom Creek Hatchery.

“Saskia’s effort to raise awareness, and provide practical strategies, to address environmental issues is truly inspirational,” said Jed Goldberg, president of Earth Day Canada. “She has shown great leadership within her community, and internationally, and is a shining example of how important youth are in addressing the challenges before us.”

Saskia received the National Award in addition to the $5 000 Regional Award at a ceremony at the EPIC Sustainable Living Festival held at the VanDusen Botanical Garden.

“It is always an honour to recognize Canadian youth who strive to make the world a better place,” said Seiji Ichii, president & CEO, Toyota Canada Inc. “Along with the other 20 award winners honoured as part of the Toyota Earth Day Scholarship program, Saskia’s accomplishments are an example of the passion today’s youth have for the future of the environment.”

The Toyota Earth Day Scholarship Program was established by Earth Day Canada, with financial support from the Toyota Canada Foundation, to reward and encourage environmental commitment and action among students. This scholarship is presented to graduating high school and Cégep students entering their first year of post-secondary education. Recognizing that environmental issues are increasingly being tackled through multidisciplinary approaches, winners are selected regardless of their intended program of study. To date, $900 000 has been awarded to 180 exceptional young leaders in Canada.

About Earth Day Canada
Earth Day Canada (EDC), a national environmental charity founded in 1990, provides Canadians with the practical knowledge and tools they need to lessen their impact on the environment. In 2004 it was recognized as the top environmental education organization in North America, for its innovative year-round programs and educational resources, by the Washington-based North American Association for Environmental Education, the world’s largest association of environmental educators. In 2008 it was chosen as Canada’s “Outstanding Non-profit Organization” by the Canadian Network for Environmental Education and Communication. EDC regularly partners with thousands of organizations in all parts of Canada. To donate to EDC, please visit earthday.ca/donate.

The Toyota Canada Foundation has a long history of partnering with like-minded organizations and supporting programs in the areas of Environment, Education and Safety, including: