By westernadmin on July 3, 2013 in Motorsport, Racing 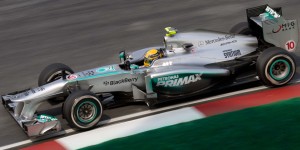 Hamilton, the 2008 world champion who had led for Mercedes from pole position, was the first but not the only casualty of tire failure at the event.

Hamilton’s rear tire blew after eight laps at around 200 kilometres per hour and shed debris behind him.

The tires of Mercedes’ race winner Nico Rosberg showed signs of imminent delamination – when tread peels away from the rest of the tire – when he made a pitstop, and champions Red Bull said cuts were also found on the tires of triple champion Sebastian Vettel, who retired with a gearbox problem.

After exhaustive analysis of the tires used at F1 Grand Prix at Silverstone, tire manufacturer Pirelli concluded that the causes of the failures were principally down to a combination of the following factors:

1) Rear tires that were mounted the wrong way round: in other words, the right hand tire being placed where the left hand one should be and vice versa, on the cars that suffered failures. The tires supplied this year have an asymmetric structure, which means that they are not designed to be interchangeable. The sidewalls are designed in such a way to deal with specific loads on the internal and external sides of the tire. So swapping the tires round has an effect on how they work in certain conditions. In particular, the external part is designed to cope with the very high loads that are generated while cornering at a circuit as demanding as Silverstone, with its rapid left-hand bends and some kerbs that are particularly aggressive.

2) The use of tire pressures that were excessively low or in any case lower than those indicated by Pirelli. Under-inflating the tires means that the tire is subjected to more stressful working conditions.

3) The use of extreme camber angles.

4) Kerbing that was particularly aggressive on fast corners, such as that on turn four at Silverstone, which was the scene of most of the failures. Consequently it was the left-rear tires that were affected.

The only problems that had come to light before Silverstone were to do with delamination, which was a completely different phenomenon. To stop these delaminations Pirelli found a solution by suggesting that the teams use the tires that were tried out in Canada from Silverstone onwards. When this proposal was not accepted, Pirelli found another solution through laboratory testing, with a different bonding process to attach the tread to the carcass. So the problem of delamination has nothing at all to do with what was seen in Great Britain.

Following the conclusions of this analysis, Pirelli stressed the following:

underestimated by everybody: above all Pirelli, which did not forbid this.

2) In the same way, under-inflation of the tires and extreme camber settings, over which Pirelli has no control, are choices that can be dangerous under certain circumstances. Because of this, Pirelli has asked the FIA for these parameters will be a topic of accurate and future examinations. Pirelli has also asked for compliance with these rules to be checked by a dedicated delegate.

3) Pirelli also stressed that the 2013 tire range does not compromise driver safety in any way if used in the correct manner, and that it meets all the safety standards requested by the FIA.

The logical conclusion is that it is essential for tires with the performance and technical sophistication of the 2013 range to be regulated and carefully controlled by Pirelli itself. In order to ensure the optimal functioning of the tires, the Italian firm would need real-time data from the teams regarding fundamental parameters such as pressure, temperature and camber angles. While waiting for new regulations that would permit Pirelli access to this data, vital for the development and management of these state-of-the-art tires, the following measures are proposed for the forthcoming grands prix, in agreement with the FIA, FOM, the teams and the drivers:

1) The use of the evolution of the current tire that was tested in Canada (and proved to be completely reliable) for the German Grand Prix this weekend. This represents the best match for the technical characteristics of the Nurburgring circuit. In particular, the rear tires that will be used at the German Grand Prix, which takes place on July 7, have a Kevlar construction that replaces the current steel structure and the re-introduction of the 2012 belt, to ensure maximum stability and roadholding. Given that these tires are asymmetric as well, it will be strictly forbidden to swap them round. The front tires, by contrast, will remain unaltered.

2) From the Hungarian Grand Prix onwards, the introduction of a new range of tires. The new tires will have a symmetrical structure, designed to guarantee maximum safety even without access to tire data – which however is essential for the optimal function of the more sophisticated 2013 tires. The tires that will be used for the Hungarian Grand Prix onwards will combine the characteristics of the 2012 tires with the performance of the 2013 compounds. Essentially, the new tires will have a structure, construction and belt identical to that of 2012, which ensured maximum performance and safety. The compounds will be the same as those used throughout 2013, which guaranteed faster lap times and a wider working range. This new specification, as agreed with the FIA, will be tested on-track together with the teams and their 2013 cars at Silverstone from 17-19 July in a session with the race drivers during the young driver test. These tests will contribute to the definitive development of the new range of tires, giving teams the opportunity to carry out the appropriate set-up work on their cars.

“What happened at Silverstone was completely unexpected and it was the first time that anything like this has ever occurred in more than a century of Pirelli in motorsport,” said Paul Hembery, Pirelli’s motorsport director. “These incidents, which have upset us greatly, have stressed the urgency of the changes that we already suggested, which will be introduced during for free practice in Germany on Friday. We would like to acknowledge the willingness of the FIA, FOM teams, and drivers to act quickly to find an immediate solution to the problem. In particular, the adoption of winter tests, arranged with the FIA, that are more suitable for tire development and the possibility of carrying out in-season testing will contribute to the realization of tires with increasingly improved standards of safety and performance.

“I’d like to re-emphasise the fact that the 2013 range of tires, used in the correct way, is completely safe. What happened at Silverstone though has led us to ask for full access to real time tire data to ensure the correct usage and development of tires that have the sophistication we were asked to provide and extremely high performance that has lowered lap times by more than two seconds on average. While we wait for a change in the rules, we will introduce tires that are easier to manage,” said Hembery.